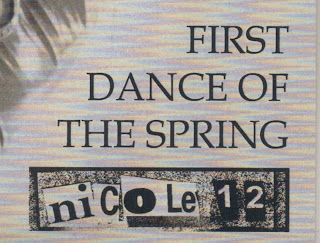 Have just spent a pleasant while listening to the latest 7"EP from Finnish project Nicole 12. "First Dance Of The Spring" is released by Freak Animal Records, although the sleeve gives away no clues or catalogue numbers. Nicole 12 is a project of Mikko Aspa, better known (maybe) as Grunt and/or Alchemy Of The 20th Century. Mikko deals in noise, power electronics and noise. He is a master at it!
I have the first couple of Nicole 12 albums on CDr (I think they have received fully blown CD releases now) and the 3" CDrEP "Lolita Love" all classic stuff. I have fallen by the wayside a little with recent Nicole 12 releases (really wanted the Japanese Tour Tape) but after hearing this 7"EP I'm going to get the latest LP. The EP is powerfully structured. First track "Memories Of Her Presence" has the sound of a ghost town, tumbleweed blows across an empty playground, church bells toll in the distance as a squeaky swing blows in the breeze. It's a great picture. The gently whispered vocal sounds like a "paper cutting". Track two "Viola/tion" is frenzied electric guitar over a grinding "industrial" synth drone. Pure Wilkins - straight out of the "Information Overload Unit" songbook. Track three "Pony" is the embodiment of Nicole 12. The purpose of the project. Mikko plays acoustic guitar over a voice of a girl talking about how she was duped into appearing in porno films. We are in Sotos-Land here. The tape does sound a bit "Channel 5" (ie actress) but over a surprising acoustic guitar it holds interest.....punchline is a bit obvious...which made me think...mmmmm Channel 5. The final track is the title piece "First Dance Of The Spring" and again we are in S.P.K. territory, a power electronic pulse digs a groove that is instantly hypnotic, a great joy. Vocals again - grunted and slightly unnecessary...Mikko does have a tendency to adopt Black Metal type vocals but here they are well in the mix to become a distraction. It is a great EP, and if you like old school industrial music or European Power Electronics (like me) then this slab o' vinyl is indispensable. Buy!

I think it was some time in the late 1990's that I came across the work of Mikko Aspa. Alchemy Of The 20th Century compilation appearances then a tape release on the Finnish Kaos-Kontrol label. Alchemy were more ambient, complimenting Mikko's work as part of Temple Of Tiermes. I have seen Mikko play live a few times, the first being 11 years ago as Grunt & Cloama in Finland, the performance was hypnotic with Mikko thrashing oil drums to an electronic drone and a backdrop of the Budd Dwyer suicide. The last time was in London where Mikko was part of Pain Nail, and was the best live sound of that evening.
I think the only two projects of Mikko's I am still non-plussed by are Clinic Of Torture & Harsh, but I'll still keep an ear out for his work.

I bought the Nicole 12 from Martin at Unrest Productions. Recommended.
Posted by Steve at 20:14