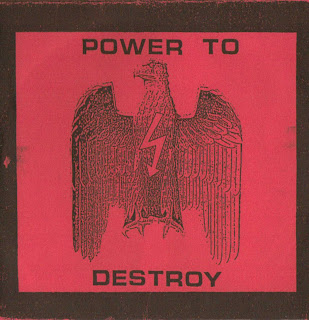 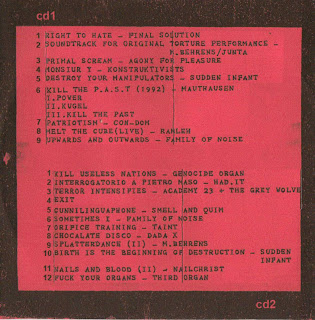 I have just spent a pleasant while listening to a CDr bootleg copy of the 1993 compilation "Power To Destroy", originally released as a2xC60 tape package on the UK Lebensborn (Liveborn) label. One of Trev Ward's labels (I think). I have no idea who put out the bootleg, I've had this for quite a while....
I like compilations. I have mentioned that before - whether they are documenting the sound of an area, a venue, a genre, a label - I am always keen to hear. Most compilations have "hidden gems" and "Power To Destroy" is no exception. Strangely enough Tony Wilson mentioned in the book "Shadowplayers" that he disliked the compilation but two of my favourites are "A Factory Sample" and "A Factory Quartet"...but there y'go.
"Power To Destroy" is a great document of who was doing what in the underground tape / noise scene in 1993 rather like the Harbinger Sound 3xLP compilation "...And The Vultures Miss Nothing" is a great document of noise artists in the late 1990's, a few names are shared on both releases; Thirdorgan, Smell & Quim, Taint and Con-Dom. Some of the names on the compilation I have never heard of, like the first band Final Solution. "Right To Hate" is a re-write of Whitehouses' "Right To Kill". Straight forward, no messing Whitehouse copyists. A poor man's Intrinsic Action. M. Behrens follows with a track of "performance noise" (I have just invented a genre - audio for a visual). It all starts with a wall of noise with tape splices and distant voices then builds into a great rhythm. The sound of Controlled Bleeding and Throbbing Gristle is hidden in this track and speaking of Throbbing Gristle track 3 by Agony For Pleasure could have come straight off an early TG live tape. It's the bass guitar sound and screaming. Excellent stuff. Glenn Wallis and Konstruktivists offer a track of guitar and a Dr. Rhythm beat with phazer (pedal) on stun. Excellent track, but then again Konstruktivists are excellent. The track ends up sounding like an early Clock DVA tape. Track 5 is Sudden Infant with his noise will eat itself sound. Noise spliced and mashed into a cacophony. Mauthausen Orchestra follow with "Kill The P.A.S.T." a track in three parts. First two are rhythmic, the sound being akin to the "gunshot" sound on an old Korg MS10. The third part is built of drums and sequencer and a sound that wouldn't be out of place on an old Portion Control LP. Good stuff. Unfortunately Con-Dom provide a "lo-fi" live recording. It's kind of murky and gets lost, like the next track "Melt The Cube" by Ramleh. This is the sound of Ramleh in their "Grudge For Life" period. Guitar, synth and vocals. It does sound like a Swell Maps 45 played at 33 rpm. The first CDr ends with Family Of Noise. Named after the great Adam & The Ants song? "Upwards And Outwards" is a dark gothesque piece with militaristic drums and bass guitar with moaning vocals, it brought into (my) mind Hunting Lodge.
CDr two starts with a really weak track by Genocide Organ. Shouty shouty vocals over a really trebley bass and beaten tin. Nothing like the sound of Genocide Organ in the 21st century. Had.it follow with more "performance noise". A very long piece of synth noise over scrambled guitar. The recording sounds live. The album really picks up with "Terror Intensifies" by Academy 23 & The Grey Wolves. Academy 23 are Andy Martin and Dave Fanning from The Apostles and the cartoonist Lawrence Burton. This track is one of the hidden gems. A Teutonic voice is manipulated through a variety of effects, mainly delays, reverb and phasing. Electronic noises swirl in the background. Track 4 is either called "Exit" or is an untitled piece by Exit. It lasts 10 seconds. "Cunnilinguaphone" by Smell & Quim is a great track. A dark and moody nightmarescape very atmospheric and it reminded me of how bloody good Smell & Quim were in the early 1990's. (Must dig out my copy of "Jissom Killers" soon). The second offering from Family Of Noise is more manipulated voice, the compilation has got very "dark" over the last three tracks but then Taint and Dada X break that with offerings of one dimensional noise. Marc Behrens and the strangely titled "Splatterdance 2" picks up interest with a really fast moving track. High powered electronics - mic'ed up water (?) and birdsong all joined by a rhythm that sounds like the flapping of a birds wing. The track has a direction a concept and purpose which is more than can be said of Taint or Dada X. The Behrens track brought Column One to mind. The second piece by Sudden Infant is the closest thing to JapNoise on this album. 1993 and the great JapNoise boom was just about happening (?). Nails Ov Christ - the splinter group from The Grey Wolves - offer a "lo-fi" live recording of guitar and vocals through a Roland Space Echo. The album finishes with JapNoise band Third Organ and "Fuck Your Organs". If released today then The Wire would claim it as HNW, but to me it is just N.
Did the original cassette come with a booklet?