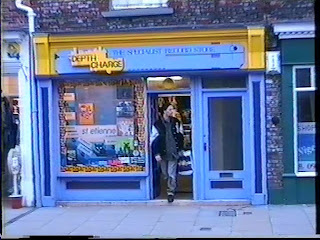 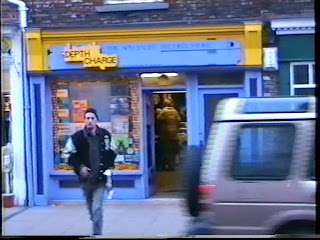 My good friend Tim sent me a couple of video stills through the inbox the other day. Made me smile. Mainly it is my outfit. My choice of attire. Did I really dress like that? The stills were from a "travelogue" that Tim was making in 1993, he was heading for India + Japan and did some precautionary footage (check all was OK with the camera etc) in York.
Mainly it's the jacket. the LA Raiders jacket. I used to wear it all the time back then - still got it, I think it is in the attic somewhere. I cannot stand American Football - never could...so why the bloody jacket?
Early 1990's were a strange time for me. 1989 I was living in Manchester, Hulme, the Hulme Crescents, I had been there since 1986. I first moved there in 1983, but had to take a year off in 1985/86 to plot and plan the rise of IBF in Sheffield + Lincoln and also prepare my body for the immense amount of drugs it was to absorb for the next 5 years.
By the end of 1989 I was living alone in a squat in Charles Barry Crescent, Hulme. Manchester. (Now deceased). The hip-hop, techno, drum n' bass craze had taken over our lives...well not my life, but those who were living around me. Where before half a dozen of us had got out of our heads by heating knives on a one bar electric fire and inhaling the collective ounce, then listening to some Sonic Youth or Throbbing Gristle or Tibetan Red we were now a family throng and going out every night to strange places and inhaling powder. Not only that - we were listening to Dance Music. There was a place called The Kitchen on Charles Barry Crescent, that was above us. We would go there of a Friday night/morning and listen to A Guy Called Gerald DJ the night away. 808 State and the crew from Eastern Bloc were our friends. We would meet in strange clubs in Salford, Moss-Side and Central Manchester. I used to have this little mini mono portable tape machine where I would play tapes by Public Enemy and Hardhouse.
Bizarre.
I escaped in mid 1990 to York, then to a little village in The Vale Of York called Thorganby, but I still had this hangover of techno, drum n' bass, hardhouse, dub, rappy, hip-hop going around in my brain.
Residue.
At this point I had no record collection, but a secure house I could build from. I bought records by Ice T. ("Let's Get Butt Naked And Fuck" for fucks' sake), by Digital Underground, by Paris and (yes) A Homeboy, A Hippie And A Funky Dread. I have never been so lost in all my life. My friend in Manchester had an LA Raiders "anorak" - it was his pride and joy, in 1991 a new shop opened in York selling American NFL clothing. The LA Raiders jacket was there for £100, my wife (the 1st Mrs. Cammack) offered to buy me it. How could I say no?
I wore it religiously. I soon went from buying shite mind......but I carried on wearing the jacket. It was comfortable and then with starting up Dieter Muh it appealed to my sense of humour. I wore it whilst supporting Ramleh in Nottingham - with a Sutcliffe Jugend badge on the right breast. The last time I put it on was around 1996/97 when I was walking down Holgate Road in York one afternoon and this car pulled up beside me and a guy from the passenger seat told me that he was going to kill me - if he ever saw me again, he was going to kill me. There were other words spoken, although I must admit I didn't hear a reason but he made it cock definite to me that I was to be killed...... I mentioned the episode later on amongst friends in a York pub when one of the crowd said that I was the spitting image for a speed dealer who (incidentally) went round York in a LA Raiders jacket. Never worn it since!
I was at a gig in 1991 or 1992 in Manchester - African Head Charge and First Offence. I had travelled from East to West of the British Isles to see First Offence support African Head Charge. What bloody drugs was I on? Anyway, whilst at this gig some bugger tried to set fire to my jacket so the "id" of LA Raiders on the back is burnt.
The jacket was more bother than it's worth.

In the pictures I am exiting Depth Charge Records on Goodramgate in York. A fine shop opened up by "Fat Gary" who used to help out at Red Rhino Records. Because of the time it was tecnocentric. Lots of Dance, Trance, EBM, Rap type of stuff, but there was good stuff on offer. I bought a lot of the Dying Earth catalogue from, there and Mossey behind the counter used to give me stuff. He'd say "'Ere 'ave this, it'll never sell" and give me some release on Ash International or Touch. Nice guy. I did gain some semi cult status for a month or so by being the guy who brought Jimi Tenor and the Sahko Crew to play live in York - for this I got GPR releases free and stuff by Beaumont Hannent. Yeah, I know....WOW.....

I shall wear the jacket again before I give it to Oscar.
Posted by Steve at 21:04