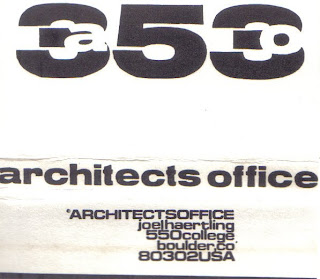 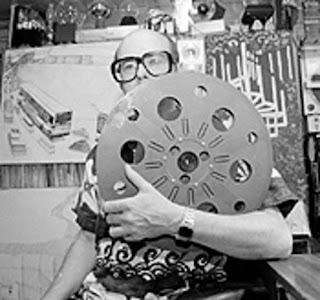 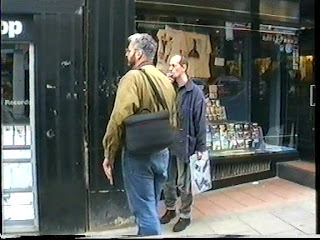 Just spent a pleasant while listening to Architects Office. Namely the cassette "AO 353" on Audiofile Tapes. I managed to pick it up from the Feine Trinkers Bei Pinkels Daheim "merch" stall last week.
Architects Office are from the 1980's. I was introduced to them by Dan Plunkett. I was put in touch with Dan (from Austin, Texas) by my good friend Tim back in 1982. Can't remember why? Probably trading live cassettes or some such, but in 1982 we set up a correspondence that lasted ... well to this day. Dan was a mail artist and founder of ND Magazine (New Dachau). Every few months Dan would mail a package with stamps and xeroxes and cards and tapes. Tapes (copies - not originals) by the likes of Croiners, Paul Thomas, If Bwana, Joseph K. Noyce and Architects Office. Stuff that was just unavailable to my ears in Lincoln circa 1982. It was Dan that first sent me a cassette of Soviet France and Paul McCarthy - and NKVD/Heute "Proir To Intercourse" (I still have this beauty)! For opening wide my audio receptors and providing me with free copies of ND Magazine, I cannot thank Dan enough! I met Dan in 1993 when he paid a flying visit to Nottingham to visit Tim. (He was on his way to interview Chris + Cosey in Norfolk). We went record shopping and he kindly bought me a Psychic TV "Live At The Ritz" test pressing LP. (I still have this beauty).
So, with the pile of "have to plays" piling up, I went for Architects Office. The cassette - no markings, just a plain old Sony UX C60 Type 2 - starts of with an American woman explaining that she's going to sing some songs on this cassette, and she's really happy that somebody's going to listen.....I thought....eh up.....My mind went back to 1997 and to when Mick McDaid bought the Fiene Trinkers Bei Pinkels Daheim CDr "Papagoyenboom" on the Greek Absurd label. Initial copies came with a "free CD". Excellent - so Mick made sure he was one of the first in the queue. When the package came the free CD was some Greek generic pop a la Kylie Minogue or Sonia. Ever had the feeling you've been cheated? My immediate thoughts now were, has Jurgen swapped the AO tape for some found cassette?? Bastard, and all that.....
But no...
Soon the tape falls in to experimental soundscapes and tinkering piano, found sound, bowed strings etc. phew. It is excellent stuff and really does take me back 25 or so years to my bedroom at my parents' place. This tape also features the piece "Variete" that was on the Audiofile/ND tape collaboration. Tangerine Dream synth noodles to a man. The second side has this announcement from Southend train station that simply blew me away. Just a simple "The train now approaching platform 3" etc type of announcement, looped. Simple but after 25 years STILL AFFECTIVE.
It is very hard to find material by Architects Office nowadays. I will leap on it like a hungry okapi on the Savannah. It is also difficult to find out about the main protagonists. Googling Architects Office is a nightmare. Joel Haertling seems to be a film curator in Boulder, Colorado (home of "Mork and Mindy"), and still doing soundtrack work for Stan Brakhage.
Stan Brakhage was another one of Dan's recommendations. I have seen a few of his short films and always sat there mouth agape with my head spinning with wonderment. Joel even starred in Brakhage's "Faust" films - non of which I have seen. Others seem to have disappeared. Rick Corrigan plays accordion for The Pickpockets Ensemble, based in California....but that's about it. 21st Century comeback. I hope not. Architects Office is not laptop music!