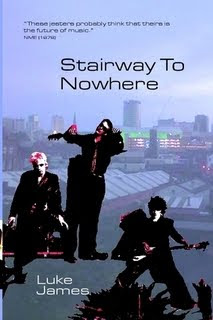 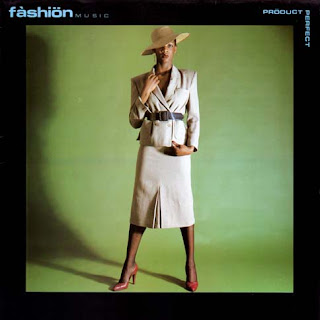 This will annoy some folk, but I have no idea how to insert accents or umlauts on to letters whilst typing this. I am sorry but Fashion will be Fashion.
Followers and passing chancers will realise that I like reading about music. Biogs, Autobiogs, and sometimes critiques - I like reading about music. As a rule of thumb it is stuff between 1975 - 1985 or bands/artistes that started around that time. I do have a copy of "Hammer Of The Gods" on the bookshelf so it is only a rule of thumb. I have just finished reading "Stairway To Nowhere" by Luke James of Fashion. It has been an unputdownable book for the past couple of weeks.
I never owned a record by Fashion. Still don't. A friend E Mailed me to let me know that this book was out and I thought "yeah - that's a must read". Like a book by Spizz or "Boring Bob Grover" or Eric Random it was "Yeah, I must read that". Fashion were my friend Mark Collin's band. He bought their stuff and played it whenever I visited, and that was fair enough. They weren't too brilliant to share like Stiff Little Fingers, ATV or The Cure but OK for Mark to have, like Cockney Rejects, The Chords and Toyah. They played Lincoln AJ's in 1979, but I never went along.
This is a fascinating book of how it was back in the days, to be playing toilets, to be high on ego and amphetamine. The characters - band members - shift between likable cads and all out cunts, and no apologies are made. From the off Fashion existed to escape the Birmingham factory life (British Leyland) and to travel the world taking as many drugs and fucking as many groupies as possible. Same kind of M.O. as Devo, but they hid behind an arty manifesto instead of a bucket of eyeliner.
The story is fascinating. A rise towards a record contract with Miles Copeland and IRS to a tour with the Police around America and odd dates with Squeeze, The Cramps, The B52's and The Stranglers in between. Then being dropped by their management and record company and having to support Duran Duran and tour with U2 in 1980. Excellent story, excellent read. One downwards point is that I would have liked a where are they now bit at the end. I guessed that the Fashion sound guy and driver Miki was dead. The book is dedicated to him and Luke always describes him in a cloud of B+H, but to read (on Wikipedia) that Mulligan also has died was a surprise and has some what upset me.....

Anyway, the book is fascinating, very humourous and deserves a read. After reading bland books by the likes of Hugh Cornwell and the book on XTC of late, this is a breath of fresh air. Luke really gives the feel and emotion of what it was like to be in a band in the UK in the late 1970's and the senselessness of it all and still with the "I can't fucking believe this is happening - this is my dream come true" to the "Where the fuck did it all go wrong"? attitude. Brilliant.