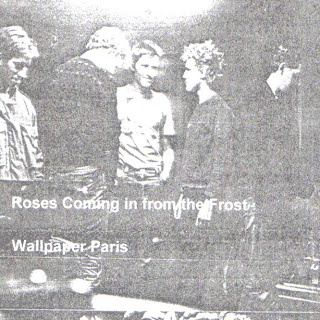 It does seem a little strange to be a solo project at this moment in time. Since I began making a noise back in 1979, this is the first time I have been a "solo artiste". OK, I did start making cassettes of rudimentary sound by myself, back in the day...flushing toilets, silly rhymes, violent wind etc....we all did, but I have never been "solo".
(With the encouragement and assistance from close family and friends at this moment in time Dieter Muh doesn't seem like a "one-man show", but I hopefully know what I mean)?
I have always been in part of a duo, or a trio, and in some part in control of these projects. One of the times it did not happen was the time I was the drummer of Wallpaper Paris.
1982. September 1982.
Wallpaper Paris were a five piece ensemble - later to become a six piece, but let's not get ahead of ourselves.
The group, the idea (as Adam Ant would say) was one of Simon Jarvis. (see elsewhere on this blog). In September 1982 he visited me with the offer of being the drummer in the band he was forming. At the time I was one of those rare commodities - a drummer with a drum kit and I had just finished a spell as drummer for Lincoln's finest power-pop-punk trio Total Strangers. I was a drum stool for hire. My only condition was for Dave Uden to be the bass player. Simon did have a couple of names / possibilities for the bass player role but as I was a drummer (with a drum kit) I forced the hand of chance and Simon agreed......

September 1982. Five of us gathered in a garage, just outside of Skellingthorpe in Lincolnshire. Myself and Dave (drums and bass), Simon (guitar), Tim Bayes (voice and saxophone) and Andrjez "Crabby". (synthesizers and sequencers). we used to rehearse on a Monday night, set up our equipment and "jam". We used to record everything. Everything. And then sit in Simon's parents kitchen drinking coffee and/or cup-a-soup and discuss what we should concentrate on. It was real rock n' roll.
As a rule, all Wallpaper Paris songs would start with the drums. A drum pattern. Followed by bass line followed by guitar part, followed by either sax blurt or vocal with an underlying Korg Synth warble somewhere in the distance.... These were good times, we came out with some great songs. Tim wrote and sang lyrics that to this day (28 years later) I can remember "off by heart" - why? - because they were/are great lyrics. Only today I was talking about a synopsis of a book and as soon as I said "synopsis" my mind went:
"Wayward synopsis of a crazed embittered life"
From the Wallpaper Paris song "A Preview Of Death".
Wallpaper Paris were good...OK we had a shite name. The name was Dave's idea and was a follow on to his Active EG theme (or so he told me). It comes from a quote or a line in a book that goes "give me a day and I'll wallpaper Paris. Art in action type of stuff.

What did we sound like? We were post-punk. Goth before the term was invented. Elements of TG, Clock DVA, The Pop Group, Au Pairs, Bauhaus and Virgin Prunes, as guys in our late teens / early twenties this was the kind of stuff we were listening to and wanted to be part of. We got ourselves a gig in November 1982 at Alexandre's in Lincoln.
Alexandre's used to be called The New Penny Club and was situated at the top of Lincoln High Street. Alex Jackson - local entrepreneur and part time gangster took it over after his club "AJ's" folded after folk were shot at a Comic Romance gig. Great days. As a teenager I loved "AJ's".
Anyway. On the night we were support to a Heavy Rock band from Swinderby called Exit Stance. You have to take the gigs as they come - especially in Lincoln! We played, we were shit hot, we even got an encore but certain elements of the band did not want to play live again. So it was a case of "we came, we played, we conquered" as shortly afterwards we split.
On the night we were seen by a local violin player called Martin who wanted to get involved, Dave and I were keen but Simon just gave the poor bugger a hard time at rehearsals that he just lost interest, shame as he was a nice lad (from Swanpool).
At the start of 1983 we changed rehearsal space to an outhouse in Skellingthorpe Woods. OK, not an outhouse but a self contained one bedroomed bungalow with swimming pool attached. Monday nights became luxurious...too cold to swim but Crabby brought drugs in to the arena. Home grown grass. As strange as it may seem reading this but at the time I was quite "anti" drugs being brought in to the rehearsal room....but drugs won out. We became lazy.
January 1983 - 5 months later, and we had split. Dave and I went to form Diet Of Worms, which Crabby was later to join....we needed his home grown y'fuckers. Simon formed Peking Trees with a guy who later joined Slum Turkeys and Tim went in to IBF with myself and a chap called Sean - and then it gets a bit all incestuous!
Sat here in 2010, I truly believe Wallpaper Paris could have got somewhere better than a Sunday night in 1982 in "Alexandre's". I have a CDr of a C90 cassette that proves so - I wish I had the technology to put some download on this blog. I don't. I am sorry.

Picture is a copy of a cassette tape I compiled for Drew Cormack back in 1983. (I make no apologies for the title).
WALLPAPER PARIS - L-R: Crabby, Tim Bayes, Dave Uden, Simon Jarvis and Steve Cammack.
Posted by Steve at 17:08