The Sound Of Lithuania 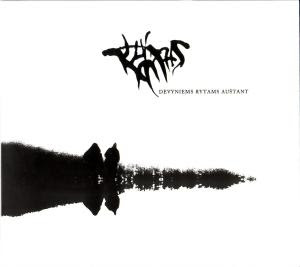 Just spent a pleasant while listening to two new arrivals at Hartop Towers.
A couple of weeks back I saw listed on the noisefanatics forum a split tape by Pogrom + Oorchach. I don't know why, but the titles of both projects appealed and with a handful of Dieter Muh 7"'s I still have for trade I mailed off to Lithuania for the cassette. Unbeknownst to me the chap who is selling the tape also owns the noise/PE magazine "Terror", and a review of the single will appear in the 'zine. Chance to shift a few more copies.
The cassette arrived as did a bonus CD of Lithuanian project Budrus.
Budrus are a two-piece who operate in the area known as dark ambient. Beautiful cinematic sound, full on guitar and synth layered drones very akin to Troum, Propergol and/or Inade. The sound of desolation and decay. Stirring stuff with titles like "Glow Of Nuclear Morning" and "Is The Reaping", you know they both wear black.
The split tape (limited to 98 copies) is a different barrel of fish. Oorchach sound like Soldnergeist and/or Genocide Organ did about ten years ago. Very Cold Meat. Luckily I love the sound of this brand of Power Electronics. A Whorle of noise to militaristic vocals. Pogrom sound more organic. Lots of distorted shortwave and interfering with metal springs, again with Lithuanian vocals.
I love discovering new sounds, and this package from Vilnius has not let me down. Oorchach and Budrus stuff will have to be found during 2010, I could do with hearing more.
Posted by Steve at 14:48