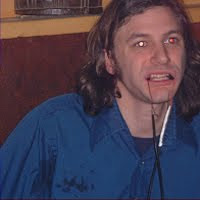 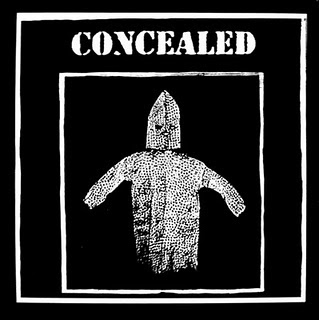 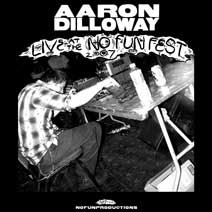 One of the great surprises of last year was Aaron Dilloway, The sound of Aaron Dilloway. My dear friend Steve Underwood put me in touch with Aaron - he wanted to stock and trade the IBF 12"EP, so I did the deal and got a box full of Hanson Records stuff (as well as the magnificent "Michigan" LP set). At this point I had no idea what Aaron sounded like, I was very keen to hear his collaboration with Robert Turman, but as I saw the amount of Hanson Releases / /Dilloway releases there were I was not expecting any great shakes. I was thinking bedroom noise artiste type of thing. So, a great surprise when I started playing the stuff. Textured and manicured loops, sustained rhythms and controlled feedback. Intense. "Infinite Lucifer" being an immediate classic. "Face Mask" / "Beggar Masters" etc... Brilliant stuff. I am now a #1 Dilloway fan!
A shame I missed his 2009 tour with Nate Young, but I did manage to see Aaron live at the ICA last November. I stood there rooted to the ICA floor by the sheer power of vibrations that Aaron was delivering, a truly powerful performance.
So. That great shop Norman Records (of Leeds) were selling off some secondhand Dilloway stuff, I thought it time to buy.
"Boggs Volume 2" CD being first. This (to me) is early Dilloway material. A CD re-release of a previous CDr release "Seizure" from 2001. Two studio tracks that a quite non-cognitive. Haphazard electronics and quite a disappointment. Sounds like improvised awkward synth noodling. Often there is a loop to pick up on and Dilloway hits the spot, but as soon as I get in to the groove it stops, cackles and whirrs in to more abstract stuff. Bonus stuff on the CD comes from 2 live performances. This is the first Dilloway release I have not felt partial to. Next on the turntable is "Concealed" LP on No Fun Productions. 2006. No track listing, just three tracks and back to the great sound of textured looping, building / deconstructing / re-building. Loud and it sounds like Column One, loud and I am reminded of very early Soviet France, loud and it sounds like a slow version of Non. This LP is an immediate favourite. Obviously Aaron has been working on his sound over the years and now has reached this stage of genius. Heavy vinyl to boot. Lastly I spin the "Live At The No Fun Fest 2007" split LP with Carlos Giffoni, again on No Fun Productions. Here we have what is damn close to what I witnessed at the ICA. Contact mic's in the mouth and the manipulation of magnetic tape through a bank of effects.
If anyone out there is reading this and is into late 1970's industrial / electronic music and has not heard any Aaron Dilloway stuff - Just like I was this time last year - may I reccommend "Concealed" and "Live At The No Fun Fest 2007" LP's. I'm still going to be playing these records well in to my 60's!
Posted by Steve at 16:01