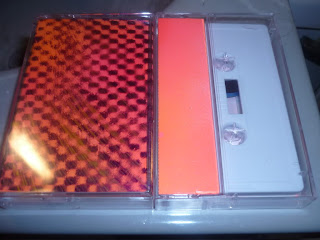 The first and most assuredly not the last Astral Social Club release of 2010 came to Hartop Towers this week. An untitled 2 track C30 tape limited to 50 copies released by Neon Blossom Records of Chicago. Track one is a very very lo-fi stereo recording of ASC live somewhere. This is not a mixing desk recording, this is a recording from the back of the room on to a (at a guess) binatone C60 cassette. It sounds very similar to what Neil performed in Exeter in 2007, but as the cassette carries NO INFORMATION whatsoever I am left blind. I hate no information. I love information. Getting information from the noisefanatics forum site I know the track is called "Capitals Collapsed"; maybe it was recorded in London, Paris, Stockholm? Or during the global credit crunch? If side two was a similar affair then this would have been a disappointing release - but - side two is the "studio" track "Stig Fucking Anderson". Neil's paen to the former ABBA manager/songwriter/guru. A Glitter Band drum pattern looped to a japanese girl's voice saying "Stig Anderson", over and over. After a few minutes of this I thought it wass going to break out in to something completely different, but it doesn't it just shifts loop points and echoes and introduces eerie and non-cognitive sounds to the drum loop/voice. A work of bloody genius.
The last ASC release I got was the split 7" on Krayon Recordings. The track "Space Crater #1" (when played at 33rpm) evoked Cabaret Voltaire's "Three Mantras" 12". This track does the same.
Posted by Steve at 16:12