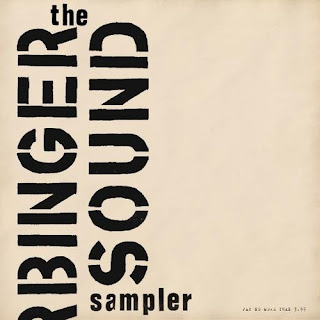 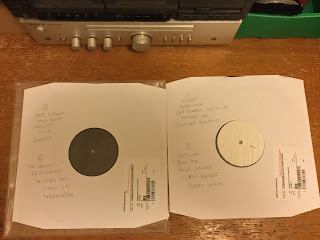 Out and in the shops on March 24 comes the double LP "Harbinger Sound Sampler". The third compilation release from Harbinger Sound label after "….And The Vultures Miss Nothing" (2005) and "Eight" (2007) … I am not counting the 2013 vinyl re-issue of the old Broken Flag cassette "Le Couperet".
There is of course the missing compilation "Standing Still Like A Humming Bird" .. but we don't speak of that these days as Harbinger Sound has moved on, moved with the times, after a time in the mid noughties releasing scatter shot sounds from the likes of Hair Police, Prurient, Carlos Gifoni, Dieter Müh and Smegma, Harbinger Sound has become more focused and relevant to it's time. Caught the zeitgeist (they were a good band).
So now in 2017 comes the new manifesto. Statement of intent. Two albums for the price of a pint (in a 'Spoons and in the North) £3.99. Only available in shops too … there will be a few mail order outlets, that's how the world turns these days .. but not available from the label direct.

Toylettes kick off the proceedings with a track called "Omi (Version)". Toylettes are a punk band from Berlin, they sound like they should have been on Rough Trade Records in 1978. They sound like Kleenex. Mark Wynn keeps the energy going with a track about Frank Sinatra being in payment of the mafia and Michael Buble's slippers all played on Fisher-Price instruments. Steve Ignorant's Slice Of Life make an appearance with "Your Day Will Come". I remember this song from seeing Steve live a couple of years back in Bristol. Studio sound is acoustic and very "lounge lizard". Years ago (late 80's) I went to see Gavin Friday & Man Seezer play at the Royal Northern College Of Music in Manchester. After years of seeing Virgin Prunes and Gavin being threatening on stage, it was kind of funny to see him as a chanteur singing songs of love and sexuality whilst wondering around candlelit tables smoking French cigarettes. This is what I am reminded of every time I hear this song … Sleaford Mods follow with "Fat Tax". A tongue tripping trip hop slow motion journey that just whets the appetite for the forthcoming "English Tapas" album. Side A ends with the incredibly shouty shouty Consumer Electronics. "And At Any Rate, It's Already Too Late" is a verbal attack by a petulant irritant with spastic noise rendering it all unlistenable.
Side Two is kicked off by Phil Julian. Former Cheapmachine and New Blockader brings us his abstract, avant-garde celestial electronics with "Blanking". The sound is almost medical and plays like a Nitschian soundtrack. Phil's Harbinger Sound album "Trace" was a highlight of 2014. From PJ to JP. John Paul. If you are familiar with Sleaford Mods then you know John Paul. Poet, Plumber and a dab hand at Sticky 13! "Sissy And Ada (Red Version)" plays like a Mods track, looped samples, dropped beats, dope rhythm etc … and the voice of John Paul … it's all too short. New to these ears Future Commuter follow. I think these chaps are from Brighton (Could be wrong, I did ask Steve but was very drunk at the time). There's twenty tracks by twenty artists on this compilation and it is within the laws of probability that I ain't gonna like all of them. I don't like this track and don't really know what it brings to Harbinger Sound. Self indulgent prog rock and the reason why punk rock was invented. Thank goodness for Circuit Breaker. I have liked Circuit Breaker since I heard their 12" EP on Tombed Visions back in 2014, then their superb "My Descent Into Capital" LP a year later. "Duplicate" is a slow funereal industrial dirge, whose vocals contain that "shiver down the spine" effect. It's bleak and masterful, and again the appetite is whetted for the forthcoming album. Side Two is finished off by Sudden Infant and a live version of "Father". This is Sudden Infant as a trio, the powerful bass of Christian Weber, the percussion of Alexandre Babel sounding like a one-man Einstürzende Neubauten and the questioning voice of Joke Lanz. A great document for those who saw Sudden Infant live in 2016.
Harbinger Sound stalwart and former Putrefier mainman Mark Durgan opens side three with "Singsong Generator". It's musique concret, abstract, it's half a dozen contact mic's rustling around a Sainsbury's shopping bag. A thunderdome battle royale. The battle continues with Japanese artist and Incapacitant Pain Jerk. Battling sine waves to a para bellum beat. 20 years ago Harbinger Sound released its first record "Spifire" by Pain Jerk. Massicot follow with "Koktellis". Massicot are a punk band from Switzerland, a connection with Sudden Infant. A great song with stream of conscience vocals and delicate sound interaction between violin, bass guitar and drums. It's a really uplifting unpretentious sound. Raw and honest and this sound continues over the next two pieces. The Pisse piece has the same motorik beat / timing. Pisse are a punk band from Hoyerswerda (Germany). Karies bring the side to a close with "Es Lachte". Karies have already put out a couple of singles on Harbinger Sound, and closely await the forthcoming LP. The sound of post-punk Stuttgart. This track brings the 1981 4AD catalogue back to life in a kind of In Camera, Sort Sol, Mass kind of way. Excellent.
Side Four is mainly punk rock. Old school punk, the kind of stuff Steve Underwood (MC of Harbinger Sound if you did not know) listens to on long car journeys. Los Angeles punks The Urinals open with "The Girl Before". I don't know if this is an old recording from the Urinal archive or a new piece for the LP, bloody good though. Frustration carry on the theme with their 1978/79 style post-punk rock. High energy staggering guitar and high end bass line. A piece called "The Drawback". Frustration are a band I know nothing about. They could be from the 1970's, they could be from Germany? Hopefully they'll have something out on Harbinger Sound soon. The Lowest Form bring "5" to the album. UK Hardcore. Not a style, genre I listen to but after hearing the recent LP "Personal Space" and the freshness and energy contained therein my ears have opened. Helm mastermind Luke Younger plays bass too. Amazing. Bristol cider punks and a band who I will always associate with leather pop punks Vice Squad Chaos U.K. follow. "Impose". Foot stomping anarchy-punk, big in 1984, big in Japan now … The only way to complete the four sides is with a mammoth piece by Treriksröset. The sound of collapsing morals. Tommy Carlsson brings it all to a glorious end, it sounds like the previous 19 tracks layered and manipulated in to one great beast. A great closure.

Like great compilations of old, the "Pillows & Prayers", the "Pay It All Back" and "Cash Cows" this double LP sells for the bargain price of £3.99. It'll mainly be bought for the Sleaford Mods and maybe Consumer Electronics,but it'll be in the major shops and it's going to be great to see what folk think of Treriksröset, Mark Durgan and Circuit Breaker. Harbinger Sound Records seem to be finding direction with Karies, Pisse, Massicot, Circuit Breaker and Mark Wynn. It's not just a load of noise bands stuck together without thought or meaning this is the sound of an evolving, growing and developing label and it's great that it sticks by artists like Pain Jerk, Mark Durgan and Phil Julian who have been there for the past 20 years too …

Cargo are distributing in UK, Germany and USA. It's up for pre-order now via Rough Trade and Norman Records (Leeds), and at £3.99 it's going to go fast.