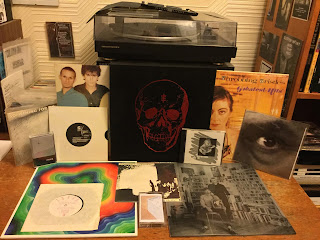 A programme celebrating September the 29th. Checking back on events, the Final Academy started in Brixton (at The Ritzy Cinema) on this day in 1981. (Not 1982 as I mention on the broadcast …. an honest mistake). Performances from Psychic TV, Last Few Days, Cabaret Voltaire and 23 Skidoo along with readings from William Burroughs and film by Derek Jarman were all recognised here … The same and Throbbing Gristle's "Greatest Hits" was released by Rough Trade US as well as the import 45 "We Hate You Little Girls" on Adolescent Records. I have played this single on earlier broadcasts so I didn't include it here - I don't like repeating tracks if I can help it. Dangerous Girls "Man In The Glass" 7" was also released on this day in 1982 but I couldn't find room … maybe later. In 1978 999 released their second LP "Separates", one of my favourite albums. I remember going to see them on the "Separates" tour in 1978 (supported by Razor - whatever became of them? I think they had one 7" out called "Death To Disco", but I have never seen a copy) in Lincoln. September 1978 saw 999. Ultravox!, Skids and The Stranglers all play a variety of venues in Lincoln. A defining moment in my youth.
Also on the playlist is the new cassette from Bulgarian project Deffektegg. A momentary slip pushed a set of headphones on to the "mute" button and 23 seconds of the track is lost in silence. Amateur Hour at the start of the programme … I apologise and will play more from the excellent "Nadir" album in a later programme.