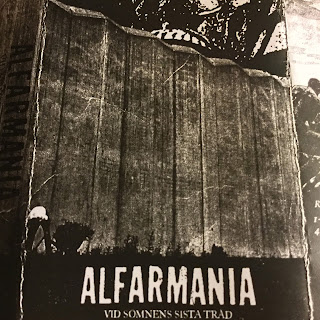 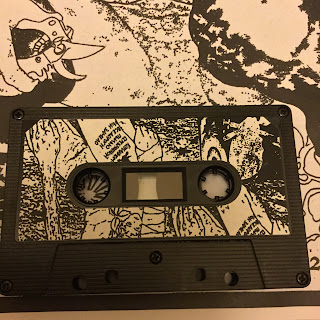 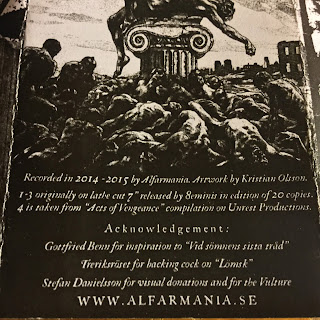 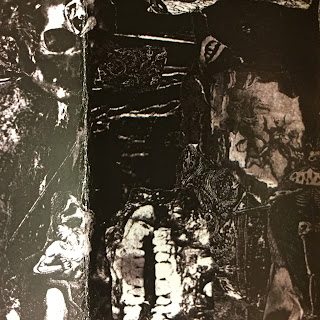 Released this month is a new cassette from Swedish industrialists Alfarmania. "Vid Sōmnens Sista Tråd" (which could mean "the last thread of sleep") is a single sided C60 (ish) tape on Styggelse. Styggelse being the label of main Alfarmania pragmatist Kristian Olsson.
The tape is a collection of rare tracks from Alfarmania released in 2015. Kicking off with three tracks from the lathe cut 7" released by Spanish label 8EMinis. 20 copies only and very hard to come across. I know as I tried to get one on release …. "Vid Sōmnens Sista Tråd" has a compulsive and dramatic chord / drone that morphs in to buzzing irritation, a scraping of scrap metals that transform in to angular feedback and distorted and distressed vocals. It's all subterranean, like sticking your head in to a deep deep well and hearing the sounds of Hades. "Kvick I Jord" is a swirl of souls, their slow heartbeats and pulses lost in limbo. "Lomsk" ("Sly") features fellow Swede Tommy Carlsson on "backing cock". Who are the members of Alfarmania these days? They were a duo once, a long time ago. A guy called Tony used to appear. No mention of him here … "Lomsk" is the cream of the cassette with its' wall of untuned radios, their frequencies riding a rollercoaster in a post apocalyptic theme park.
To have the lathe cut 7" must be an honour. The tape is grateful.
"En Otrampad Stig" ("An Uncharted Path") is more Survival Unit than Alfarmania. Sounding like a late 20th Century Genocide Organ, no surprise it was released by Unrest Productions on a compilation to celebrate Alfarmania's live UK debut.
There is an unlisted piece on the tape … a real "edgy" piece, a sound that is straining against the wire, almost reaching the point of collapse mixing clicks and hums against an assured force. One of those tracks that, when finished, made me rewind the cassette and want to play again and again …

The Alframania web site hasn't altered in three years, so try the Facebook page or failing that Cold Spring (in the UK).