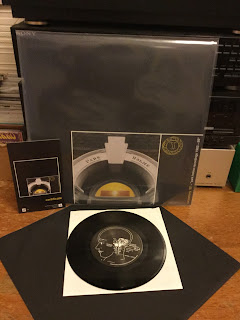 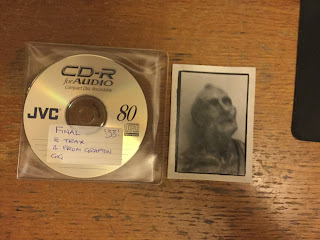 It was a few weeks ago whilst perusing the Vinyl On Demand web site trying to gather information on the latest Clock DVA "Horology 2" box set that I saw that VOD were also releasing an album by Cacophony '3.3'. I was pleasantly surprised, I didn't think the work of Kev Kettle had reached the ears of Frank at VOD, I had to buy a copy.
Cacophony '3.3' were prolific throughout the 1980's and 1990's releasing a myriad / plethora of cassettes. Based in Lincoln Cacophony '3.3' is the brainchild of Kev Kettle. There have been collaborators in the past but it has always been Kevin's baby.
I first came across the name of Cacophony '3.3' in the mid 1990's, reading reviews of his cassette releases in every edition of "Music From The Empty Quarter" magazine. Each review had the contact address of St. Catherines in Lincoln. Intrigued. I was living in Yorkshire at the time and the fact that someone was producing sounds worthy of a mention in the mighty MFTEQ magazine and from an address so close to Dave Crewe's old house in Lincoln had me intrigued.

By 1997 I was living back in Lincoln and seeking out interesting folk to have a chat and drink with. Lincoln had changed since I was last there (around 10 years earlier). I met Mick McDaid the MC of Outsider Records, he had put out records by Delphium, Stephen Meixner, Project D.A.R.K. and Cacophony '3.3'. We arranged a meet with Kevin and it turned out I was living about 1 minutes walk from "Park Holme".

Kevin gave me some fine tapes. There was one release called "Car Boot" that was absolutely brilliant (I am using past tense as I have lost / sold / mislaid the cassette). Kev had collected old reel to reel tapes bought at car boot sales in Lincolnshire and randomly spliced them together (splicing blind) to make a new sound (with the odd overdub), it truly was a work of genius. Then there was this other side to Cacophony '3.3'. The more commercial side, the more … this wouldn't be out of place on Third Mind Records side of Kev's work with full polyphonic synth and heavy yamaha drum machine patterns with freestyle electric guitars. Think Konstruktivists and / or Legendary Pink Dots.
"Park Holme Recordings 1983 - 1989" concentrates on the latter and to some extent the release is slightly disappointing. Included are the prog moments, the "white reggae" moments, the easy listening cocktail jazz style moments breaking into John Shuttleworth moments - but then again There is "In My Hair" which brings to mind Coil circa "Scatology" and the excellent raw primal noise of "Saw Throat" and "Gollum Goes Trance" an epic instrumental built of acoustic guitars and keys a la Death In June.
I wish Kevin had included his more "experimental"pieces. Maybe there will be a volume two?

In 1998 I asked Cacophony '3.3' to play live in Lincoln with Dieter Mūh at Grafton House. The gig was co-promoted by Outsider Records. I still have a recording from the gig. A chap called Martin Speck was on bass. T'was an interesting night out ….

"Park Holme Recordings 1983 - 1989" is available from Vinyl On Demand and Tesco Organistaion in Europe. It's an interesting release and something that I thought I would never see - I am very pleased for Kev - his work deserves a bigger audience and a vinyl release.