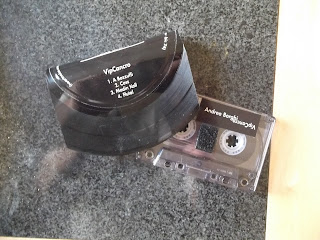 Very excited about this cassette. I do like hearing new projects / new sounds / fresh approaches etc and this has happened with VipCancro. I understand that they have been actively performing and releasing for quite a while, but this weekend I "discovered" them for myself. (Well, with a helping hand from Chris Groves of Cipher Productions). I remember (well) meeting a chap called Mick McDaid in Lincoln about 15/16 years ago and he introduced to me to a whole new sound with projects like  Inade, Column One, Origami Galaktika, Manipura and loads more  - listening to VipCranco reminds me of meeting Mick.
Chris kindly handed me this cassette when we met in Berlin in June. A clandestine meeting outside "Barbieworld" just off the Alexanderplatz. On returning I took the tape from its packaging and it had Velcro sticky pads on the cassette - if I put it in the cassette player it would have been stuck in there for ever! Now I know that Chris was getting bored of standard cassette package releases, but I thought this was maybe an "anti-cassette", one that would ruin my cassette player. So the cassette remained on the shelf in the gimp room at Hartop Towers. Last week I received a message from Chris saying that I could just peel the sticky-pad off and the tape'll play fine. The cassette comes packaged in a cut and bent old record with the information being the label of the vinyl. (see picture). The cassette is stuck with "industrial" Velcro inside the bent vinyl. Nice idea.
VipCranco are Italian. A quartet that release stuff on their own Lisca Records. I have no idea what VipCranco means - my computer tells me it is Galician, but that is about all. It does sound like Kip Keino who used to be a marathon runner for Kenya ... but I don't think that fact bears any relevance to the cassette. The cassette is a split release with VipCranco bass player Andrea Borghi. VipCranco's sound is of controlled feedback and amp noise. Straight away I am put in mind of Nurse With Wound and their "Soliloquy For Lilith" / "Homotopy For Marie" / "Spiralinsana" albums. Dark, ritual, subterranean (industrial) un-nerving ... classic stuff. Four pieces of magic. "Flutal" has eerie whale song loop and tiny tiny floating voices ..... real clever stuff, and after playing the latest These Feathers Have Plumes 3" Cdr I can hear similarities in sound.
I cannot recommend VipCranco enough and I am now going to hunt for their back catalogue!
As mentioned, Side two is Andrea Borghi, VipCranco member and founder of Lisca Records. Andrea presents more "noisier" pieces, tracks that venture in to HNW. (I think). Microphone feedback, heavy distortion and echo on stun. "Abort/Modifica 3" is slightly more minimalist but still with ampnoise and crackling electricity ... it has an air of abandonment ... and the final piece is far too long - but let's not dwell on side two - it is VipCranco that need listening too.
The tape is available from Cipher Productions www.iheartnoise.com/cipherproductions or google Lisca Records and brush up on your Italian - expect to hear on my radio programme soon.