The History Of The NME 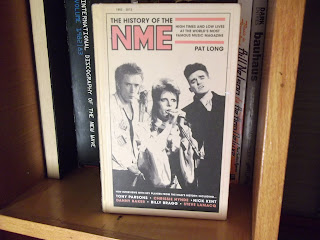 A recommended read for those folk who remember the NME (New Musical Express) in its' hey-day of 1970's music journalism. A story well told by Pat Long ... although truth be told it does turn out that there isn't much of a story, from humble beginnings as a paper specialising in accordion music through to being a stepping stone for journalists and freelancers to get books out or appear on the telly. It is told well in a linear style - quick and easy to read and becoming enjoyable when the tales of sales figures and publishers end and the colourful worlds of Nick Kent, Charles Shaar Murray and Mick Farren come to the fore. This is the early / mid 1970's when the NME was at its' most strongest (in their view .. not mine) and had its greatest writing. It was journo's hanging with "rock stars" having sex with hangers-on and taking heroin. The NME journo being treated like a "rock star" ... Keith Richards and Iggy Pop getting a lot of mentions here. Something had to change - editorship and staff overhauls changed the look and style and now we have stories of in-house bitching, the introduction of Tony Parsons and Julie Burchill - the Young Guns (for goodness sake)! The dislike of reggae (except Bob Marley) the introduction of left-wing politics, the backing of Rock Against Racism and further down the line Red Wedge etc, moving away from becoming a music weekly and covering more social issues. CND, Miners Strike, Jobs Not YOPS etc. Writers such as Ian Penman and Paul Morley writing illegible shite coming in paving the way for magazines such as Smash Hits and Select and The Face to become popular and eat in to the NME sales market. Interesting stories from ex-NME staff make the pages turn, and yes ... it features the words of Chrissie Hynde. A book on music is incomplete without the inclusion (somewhere) from Chrissie Hynde (or so it seems .... great song).
In the end the story fizzles out with bland characterless journos covering bland characterless musicians. NME didn't "like" rave or acid-house and stuck with white rock and indie sounds such as Oasis and The Smiths / Morrisey, Neds Atomic Dustbin and Primal Scream.
I looked on a newsagents shelf the other day and saw that the NME is still going, although now reduced to glossy magazine format. I didn't pick it from the shelf to browse though, I didn't know who was looking.
Back in about 1976 my older sister (Julie) used to bring home the NME from school, I used to enjoy the pictures and record reviews, but when I came to the age of actually buying a music weekly I plumped for Sounds. John Peel used to write for Sounds. Then my parents said that I could get one paper delivered and they would foot the bill, so I opted for the NME. It was useful for "news", it had a great Live Gig guide and more adverts for gigs - flyers etc than Sounds, but the journalism was unreadable and they didn't seem to like the bands I liked - it was all The Clash and not enough The Lurkers. Sounds had Dave McCullough and Dave Henderson it had Wild Planet and seemed to like Throbbing Gristle (Sandy Robertson)? For the record I also used to buy Melody Maker and occasionally Record Mirror and if I could get hold .. ZigZag.

If you are looking for a light and quick summer read I do recommend this book, a nice slice of musical history well told and easily bought (cheap) from Amazon.
Posted by Steve at 11:59