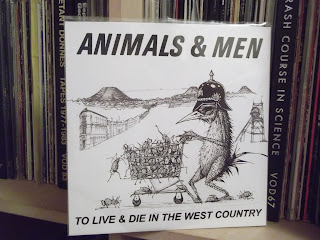 Have just spent a pleasant while listening to the latest release from Animals & Men, the 10" EP "To Live And Die In The West Country". That's right ... new release after many many years. When bands from the old days (that's late 70's early 80's to you and me) reform the news always comes with a sense of trepidation, a sigh of "oh dear" ... but with Animals & Men there's no need to worry - they have kept their sound (they have kept their line-up), they have returned with a no nonsense hi-fi lo-production classic EP that sounds as if it could have been released in 1979. The sound has a live studio feel with hardly any instrument separation or overdubs and no cymbals were struck in the making of this EP.
Four tracks that kick off with "Easy Riding", a sense of motorik, chugging blues .. "Living on planet' easy" followed by "I Never Worry", a live favourite from 1982. Discordant guitar strikes with a Wire-esque bass line and a catchy chorus. Great stuff. Side Two opens with the longest piece on the EP "Oh Death! (Traditional)". Description: Think of Neu or Guru Guru jamming with Young Marble Giants and you won't be far away from the sound. Vocals way down the mix and at times incoherent. Susan Wells has a similar style  / voice to Alison Stratton. "Just A Dot" ends the EP. A little power-pop paean that (I think) needs a scuzz guitar running low in the mix throughout ... but...it sounds like a Swell Maps song (without the scuzz guitar running low in the mix throughout).
I like this release, it takes me back to a time when I was innocent and happy. It is sing-a-long and dancey.
Hopefully Animals & Men will do some live dates to promote this release. It is on their own Radstock Records imprint. Contact ralphjmitchard(at)aol.com to get a copy. (I have no idea how many have been pressed).
Posted by Steve at 17:21