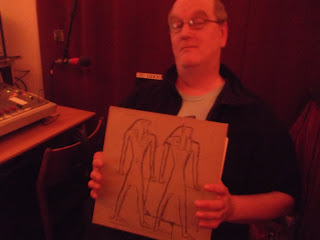 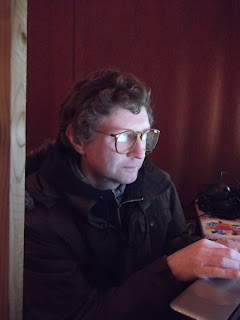 This is the tenth in an on going series of broadcasts to accompany this blogspot. No sessions or themes this time as the programme was put together around the Dieter Muh performance in Berlin. One artist I was going to "highlight" was Aeronaut and his new cassette "Coroanal Mass" on Fabrica Records, a beautiful C36 of layering Kosmische drone but unfortunately the Soundart Radio studio cassette machine decided to have a breakdown just as Side A started, it is on the recording. I quickly edited and the programme featured more Minny Pops, Zero Kama and Inade than was supposed to happen...but that's not a bad thing, eh? I hope the machine will be fixed for the next broadcast (March 7) as I have an Astral Social Club "exclusive session" to play and will be featuring the work of Neil Campbell...and I've just bought his "RRR Recycled" cassette!
The programme is now available for listening at Mixcloud. Please go to:
***** www.mixcloud.com/muhsteve/muhmur-soundart-radio-broadcast-21-02-2013/ *****
Once again, thnaks for listening and your comments are always welcome. (Here's the playlist).