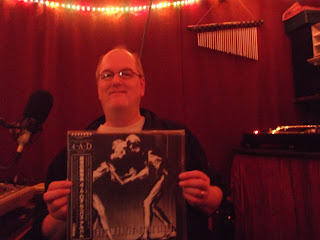 I apologise for lack of posts recently. Time has not been on my side, working longer hours, children being ill and the constant rehearsing for next weeks performance in Berlin has all conspired to me not being able to sit down and listen to what has come through the doors of Hartop Towers ... and scribble some notes and thoughts. Some great sounds have come through the doors; factor X, The German Shepherds (thanks for the nod Kristian), Troum, Phil Julian, Dale Cornish, Claus Poulson, Dave Phillips LP on Second Sleep, Unune, Edward Sol, Astral Social Club ... I even found Dave Uden selling his records on EBay and bought an Anti Group LP (or is that "won" .. as we all know life is a competition and useless without winners).
The third SoundArt Radio programme of 2013 was a relaxed affair with me just bringing along a bag of favourite records and CD's to the studio. No sessions or themes this time.
The programme is available for listening on Mixcloud. Please visit:
***** www.mixcloud.com/muhsteve/muhmur-soundart-radio-broadcast-07022013/ *****

Thanks a lot for listening and the messages - keep them coming!!