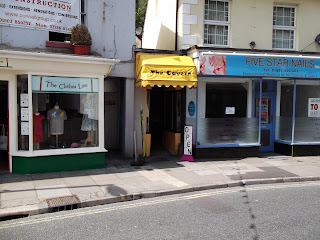 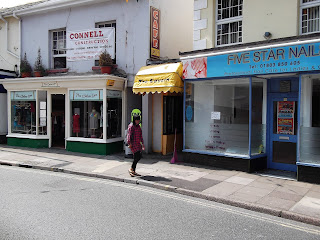 Brixham is a small Devonshire town built like a cul-de-sac. It is a lovely place, there's lots of historic interest in Brixham. It is the country's most busiest fishing port - a fact I find hard to believe, but they said it on the BBC the other night so it must be true. In the port there's a replica of the Golden Hind you can walk on and a lido to take to kids for a swim, or you can stroll up to Berry Head and Shark Point and look for basking shark and dolphin. Brixham is a lovely day out. (OK, touristy bit over...I live a few miles away and never go there)!
When I first moved down here Brixham had two secondhand vinyl emporiums. I have bought virtually all my Absurd singles from Brixham and the Test Dept Box Set, but a few years ago they both closed down. Now a new shop has opened. The Cavern on Cavern Street. The guy has only been open a few weeks and the stock is mainly 1950's and 1960's stuff. A lot of Elvis, Rolling Stones, Cliff...that kind of thing. A couple of boxes of 1980's 12" where you can buy the complete collection of 5 Star for a 5er. The "indie/punk" section was all The Church, the Bolshoi and Joan Armatrading, but like I said the guy has only been open a few weeks so I'll give him time to build his stock. He did have the first London 12" for £1.50 - but it looked a bit scratched.
If down in Devon, go to Brixham and visit The Cavern - it's two doors down from a Wetherspoons.
Posted by Steve at 19:37