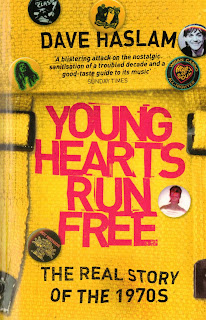 I have spent August reading the book "Young Hearts Run Free" by Dave Haslam. I bought the book as I was keen to read a book by Dave. As I mentioned in the piece about the book "Shadowplayers", I met Dave when he used to write / edit / produce the fanzine Debris in Manchester 1983 - 1984. We used to drink and chat at the Hacienda - before the music there became shite. I knew Dave then went onto DJ at the club (in the late 1980's through to the 1990's) but I did not know he had turned published author. Dave has written books about the DJ culture and the history of Mancunian music, but I chose "Young Hearts Run Free:The Real Story Of The 1970's"...the title appealed.
A lot has been written about the decade and Dave was pissed off of with "Abbafication" of it all. The documentaries that go: "I remember Top Deck Shandy" / "I had a space-hopper" / "I lost my virginity playing Twister" / "Vesta Chow Mein was like eating posh nosh". you know the kind of stuff. Music was Glam Rock - Prog Rock - Top Of the Pops - Punk and that was it. I kind of agree. Dave and I are the same age, and as Dave spent the 1970's in the West Midlands, I was in the East.

I like the title too, taking its' name from a great Candi Staton song. (Pronounced "State-On" not "Statt-On" just in case you didn't know. "Just say State"...poor hip-hop in joke there).
The book surprised me in the way that it wasn't a personal recollection, a personal trip through the decade a la Andrew Collins and his excellent "Where Did It All Go Right", or Mark Radcliffe's "Showbusiness:The Diary Of A Rock N' Roll Nobody". No, Dave has spent time in the research library looking up facts, times and dates of public upheaval of strikes, terrorist attacks and government overthrows. There are recollections from friends and colleagues, Alan Jones and Jayne Casey make an appearance (and thankfully not a mention of Chrissie Hynde - quite a rarity in a book about the 1970's).

The book is a good read, I read it, if it wasn't a good read I would have just put it away and not bothered, but....I was slightly disappointed with what I was reading. I was not reading (as the blurb told me) "The real story of the 70's that has never been told before". But then again the book was published in 2005, six years ago and in that time BBC 4 and the like have been producing documentaries about the 1970's that avoid the "Abbafication" - leave that to BBC 3 and Channel 4. Perhaps Dave and this book acted as a catalyst?

The book has a lot of meaningless throwaway sentences and veers off on tangents that are not really necessary...unless the book is being used by students who have to write a thesis on the 1970's? Bowie is mentioned a lot, as is Jim Morrison, The Real Thing and Iggy Pop. The activities of the RAF and Baader Meinhoff get covered as well as the IRA and UVF, a lot of the time I felt like I was just reading dates, names and facts and no real "story" was coming out - this is how it was...OK? The 1970's of Europe and America is covered (with a little bit of Africa when Rastafarians enter the scene with Bob Marley and Steel Pulse), no Australia, Japan etc.

Like I mentioned earlier, the book is a good read, but don't believe the "blurb".