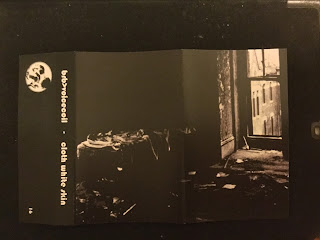 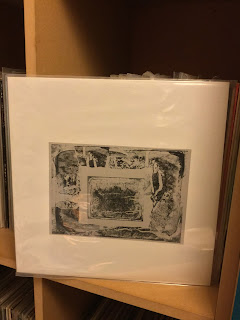 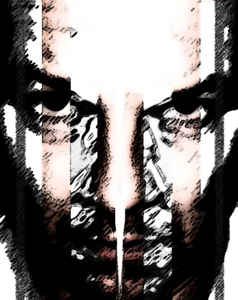 Over the last few days (great band) I have been listening to the latest release from brb>voicecoil. A cassette release on the MuzaMuza label.
The last time I heard brb>voice coil was on the 2010 split album release on Harbinger Sound, they shared the LP with Spoils & Relics. On this LP, brb>voicecoil bring a side long piece called "Valmara 69". It's a good track with sounds that seem to be travelling somewhere, slowly starting the journey and then coming to a sudden halt….and it's back to the beginning.
Strangely enough the end of "Valmara 69" sounds a lot like the beginning of "Cloth White Skin" the title track of the new cassette, and covering the whole of Side A. (But more about that later)…

brb>voice coil is the brainchild of Kevin Wilkinson from Newcastle Upon Tyne. Back in the 1990's Kevin started the label MuzaMuza with releases from Cathedra, Drill, Jazzfinger, Mlehst and Big Road Breaker. Big Road Breaker was Kevin's project in the 1990's. (BRB…geddit?). Around the turn of the century Big Road Breaker became brb>voicecoil, and after a six year hiatus he is back with "Cloth White Skin". "Cloth White Skin" is a C24 tape on MuzaMuza.
As mentioned earlier it all starts where "Valmara 69" left off on the abandoned factory floor. A factory of old automaton machines. The sound of rolling metal and clanking of rusting machines. Clockwork. Put me in mind of what The New Blockaders "Unplugged" album would sound like…..without realising a distortion has melted into the scenario..crashing and crescending. Then, rather like the construct of "Valmara 69" it all ends with minimal fuss as the room empties out and all the sounds have gone. Side 2 begins with "Crack Vessel". A staggered impulsive scratch with the manipulated sound of dripping liquids. It's irritable and internal. "Vent 2" is similar, a rhythmic pulse has replaced the irritable scratch and the dripping liquids have been distorted to sound like a voice screaming for help through an off-tuned AM radio. It's a great effect, with the addition of electric worms escaping at every chance …. The pulse beat ends the trauma.
Excellent cassette release and good to hear brb>voicecoil after so many years of silence.

There are moments of Muennich, Krube, Spoils & Relics and Mark Durgan littered throughout. It's available through MuzaMuza at https://muzamuza.muzamuza.com or through Alt.Vinyl Shop.