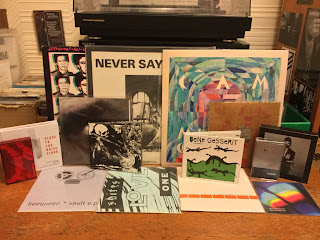 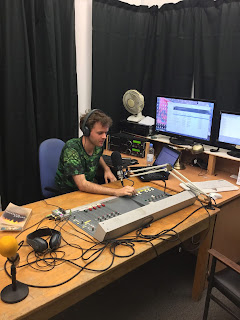 An interesting broadcast! Not as I had planned but it all turned out well in the end. Arrived at the station studio to find "Mystic Dave" of Mystical Voyagers Visionary Shamanistic Show banging out some mid 1990's hardcore techno and no turntables. A previous inhabitant had unplugged the equipment meaning I had to shuffle the playlist around until Engineer Dave turned up to fix it all ….
MuhMur Radio would be lost without Dave Mutch!
I altered the irregular "On This Day" feature to fit in Ultravox!'s "Ha! Ha! Ha!" LP. Released October 14 1977 it is one of my all time favourite releases. Top three at least. It has always been with me since 1977. My elder sister had their first LP, and went to see them live in 1976 so when this LP was released I had to get a copy first. Sibling rivalry etc.
The Copley Medal track is a studio version of the piece Ryan Martin (Mr. Medal) submitted to MuhMur Radio and was broadcast earlier this summer. It appears on a split cassette with Dekorativ Parasiter. The CAM tracks all appear on their second album "Mirror Confrontations" recently released via the Danish Skrat Records label.
Please take a listen : (Copy & Paste) :
https://www.mixcloud.com/muhsteve/muhmur-radio-soundart-radio-broadcast-13102016/

The nest broadcast will be on October 27 and (hopefully) will feature exclusive material from Paul D. Knowles (AKA Digitariat / Dachise / Spastic Burn Victim). 20:00 (gmt) at www.soundartradio.org or 102.5FM if your in or skirting about Totnes.