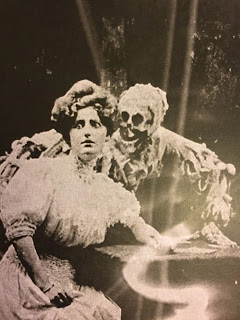 This is the final broadcast from the SoundArt Studio based in Higher Close, Dartington Estate. As of May 18 SoundArt Studios will be broadcasting live from Studio 4, Space Studios, Dartington Estate. A far bigger premise with room for live performance recordings and roundtable chit-chat. Exciting times.
Higher Close was a great space with lovely views over Dartmoor and I could often hear the chugging and hooting from the steam trains that run between Buckfastleigh and Totnes, great ambience / ambiance to the tunes I was playing.
So, this broadcast mainly features sounds that are recent editions to the MuhMur Collection. Mikko Aspa (of Nicole 12 / Grunt / Freak Animal Records fame) mailed me a copy of the Armon Kuilu LP. Very anonymous project with no titles or project information. I assume they / he  / she are from Finland but I don't know for sure. (Sneaking feeling it is Mikko himself), but it is one of the finest sounding albums I have heard this year. Same with the These Feathers Have Plumes / Isnaj Dui cassette on Was Ist Das? label. I hope you agree.
Licht-Ung made an inshore appearance at Electric Knife Records in London on Record Shop Day. I wish i could have been there, I wasn't so I played his single "Kristall". One of my favourite Drone Records releases.

The next broadcast will be on May 26 at 20:00 gmt. It will feature the subtle electronic sounds of Thorsten Soltau, including material especially commissioned for MuhMur Radio.