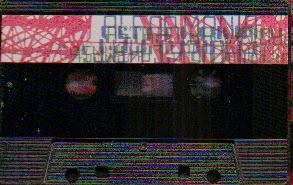 Have just spent a pleasant while listening to the latest cassette release from Alfarmania & Proiekt Hat. A collaborative recording called "Astral Slaktmask". The cassette is released by Chefsideologens Boleg.
Alfarmania are the Sundsval based project of Kristian Olsson, and Proiect Hat being  … mysterious. I did once meet the man behind Proiect Hat / Hatband whilst in Stockholm a couple of years back, we had a very drunk and engaging conversation and I don't think he told me his name then.
Quite recently there have been releases on bijou labels coming out of Sweden that contain a sound that is building on (progressing with) the old "industrial" sound of the late 1970's / early 1980's. The sound of S.P.K., of Non and of Nocturnal Emissions. Recent releases by White, Sewer Election, Treriksröset and Trepaneringsritualen spring to mind and now add "Astral Slaktmask" to the list. I think equipment has a lot to play here, no computers are used, tape loops of machinery, analogue synthesizers and old fashioned 4/8 track tape recorders are the means and method.
The cassette is a C43.
Side A starts with "Unending Nothingness", built as the kraken awakes. A Lovecraftian vision realised with its' wailing synthesisers and dripping piano. "Sondmatad Med Blyragel" is an industrious cacophony of sonic drilling. "Cut Feeling" is a great hark back to the "Befhelsnotstand" sound. The reverbed drone, the dark abyss of distorted drills and wailing sirens. Beautiful stuff, and amongst it all is the sound of death throe screaming. The title track ends side A like a transmission from a broken device left buried in the post-apocalyptic wasteland.
Sde B kicks in with "Full Tank" and "Forgerat Livsal". Both pieces sound as if they were recorded live  in an abattoir with the swinging chains and machinery churning through the big metal doors, whilst all around and beneath are the voices from the dead. "Eldergangelsen Apositiar" fits in more with the old school of power electronics. (Kristian did used to be part of the wonderful Survival Unit back at the turn of the century). The piece has a driving force with its' looped rhythm and crunching, crashing, colliding electronics and distant deranged distorted vocals. There's even some calls from the thigh bone to end the piece. "Venom Of Ages" is in a similar vein. A sonic wall is constructed before the album ends with "Cut Feeling II", and extension of the piece on side A.
All in all and excellent tape release. Research tells me there is an Alfarmania / Proiekt Hat vinyl LP, if anyone is selling then please let me know.
I am uncertain about the availability of the tape although the best place to try would be the Chefsideologens Bolag website.
Posted by Steve at 14:45