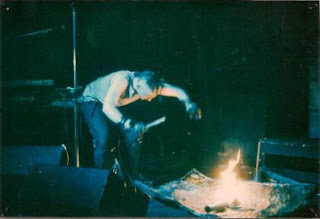 I was kind of knocked for six today when I read about the death of John Murphy. I am saddened. I knew John, not too well, but I knew him and we laughed and chatted and drank beer whenever we met.

I first met John in 1983 when he was touring as part of S.P.K. The "Metal Dance" tour of the UK. Manchester Hacienda. I kind of followed S.P.K. around on the tour and ended up being some kind of unpaid "roadie". Unfortunately when they played towns and cities where I had nowhere to stay (a friend's floor etc) I stayed in the same hotel room as John and the S.P.K. bassist Derek. I don't think either liked the arrangement. I slept on the floor, the uninvited guest. The first time this happened, just as I was settling down for some sleep, John holding a tube of toothpaste, told me that when I closed my eyes he was going to "shove this tube of toothpaste up my arse", which kind of "broke the ice". It was a great tour with John and Derek and Dave Kenny on the mixing desk.
The next time I met John I reminded him of the "toothpaste" incident and he laughed and apologised. On that occasion (February 2001), Dieter Müh were supporting John's latest project Knifeladder. We supported Knifeladder a couple of more times and it was always a pleasure to see John. After one gig we went back to Lloyd James's house and spent the night chatting away.  I questioned John about his time with Shriekback. John had played with them all … Whitehouse, The Associates, Current 93, Nurse With Wound, Death In June. Fascinating tales of London in the early 1980's.
Recently I met John in Berlin, at the NK Gallery. He was drumming with Jordi Vall's Vagina Dentata Organ. We caught up,  and as ever John was talking about a variety of projects he was involved with … and he was instrumental in getting Dieter Müh a gig at the NK in 2013.
And now I shall never see John again.

The picture above is taken from the 1983 tour (not by me), I don't know which venue but it is as I always remember him, this is how John was when we first met.
A sad loss.
Posted by Steve at 22:03