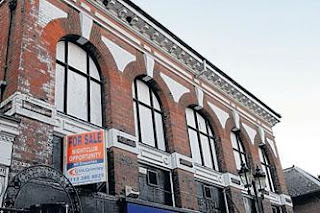 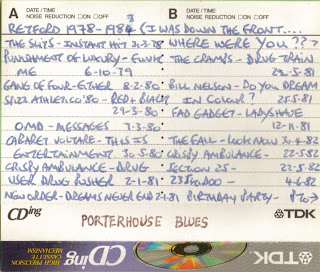 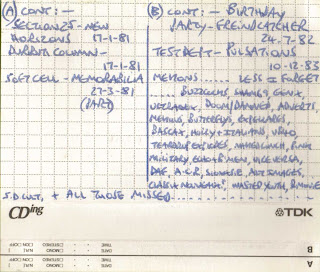 A treasured tape, one which plays beautifully and holds great memories, the compilation "Porterhouse Blues" (compiled by Tim Bayes) is one such tape.
(The Porterhouse in Retford (or East Retford as it was usually listed in the music press) was a favourite venue of mine back in the late 1970's - early 1980's. Retford is a small market town on the Nottinghamshire / Lincolnshire border).

The end of last week and I was getting retro with my listening, I was finishing the book "This Is My Generation" by Tony Beesley, the third and final book in his trilogy about his pre-teen & teenage life in South Yorkshire in the late 1970's - early 1980's. It is not that good a book actually, the first was OK albeit badly composed, the second is about a couple of venues in South Yorkshire and the writing / experiences are of folk older than Tony so it taps more in to my own recollections. I wasn't going to bother with the third book as it covers Tonys life as a mod and that doesn't interest me but I was offered it cheap by the author as thanks for mentioning the first two volumes on this blog. (Phew)!
As the book traipses into the 1980's the venue Retford Porterhouse gets a few mentions. It was a classy venue known locally as "The Slaughterhouse". I dug out the first LP by Dead Fingers Talk and the second LP by The Cure and then remembered this cassette.
The compiler and maker of this tape was an arch tape bootlegger in the day.
Apart from Punishment Of Luxury and Soft Cell I have seen all the bands on the tape live and quite a few of them at The Porterhouse. TDK as Memory. The first time I went there was as part of the band Collide, I had arranged a support slot with The Fall on their "Dragnet" tour. DAF had backed out and they were using local bands as support - I got the call from Kay Carroll.
I think this was Autumn 1979. Whilst Collide were sound checking (I was their "roadie" and newly promoted "agent") I wandered around the venue. The live bands played at the top whilst there was a mezzanine level where DJ's spun chart hits of the day - on the night I was there, new radio 1 DJ Steve Wright was spinning the discs. The Porterhouse had a capacity for about 200, walls were black, small stage that measured about ten feet by four and a six foot ceiling. It was superb! Small, dark, sweaty and always (because of the "straights" disco downstairs) with an aroma of violence.
The tape begins with The Slits in 1978, I have a feeling this is from the Slits/Rich Kids tour, I saw the show in Lincoln. Ari Up complaining about the spit. The sound quality is negotiable but I can put up with badly recorded history! The Punishment Of Luxury track is the opener from their set and is the first gig with Malla Cabbala on guitar. Somewhere in Hartop Towers I have this full gig on tape. The Crispy Ambulance track is a corker and a great sing-a-long. This was my second visit to the Porterhouse. The Crispies were supporting New Order. I was never a big "fan" of New Order in the early 1980's but they always had great support like Minny Pops or Section 25 or A Certain Ratio...hence I saw them a few times. "Power, Corruption And Lies" was the end of our relationship though. The Cramps came to Retford on their "Psychedelic Jungle" tour. Lux at the Porterhouse with The Wrecking Crew brought by their support; The Meteors. I remember being shit scared, same with Fad Gadget and The Birthday Party at the Porterhouse. That is one thing I miss about gigs nowadays, the feeling of being shit scared about what was going to happen. Not the violence brought on by a few twats or skinheads (same thing) in the audience but by what the band were going to do. I have done a few gigs (as Dieter Muh) where I have handed my guitar to folk or simply launched it across the venue just to jolt the audience and remove them from their "comfort zone".
Bill Nelson was a strange gig, previewing his Red Noise material the audience was mainly mulleted rockers shouting "Wally" and "C'Mon Billy...Show Us Yer Willy". The support was the West Yorkshire Actors performing "The Cabinet Of Dr. Caligari" - in the Porterhouse!!
23 Skidoo performing a mixture of "Seven Songs" and "Tearing Up The Plans" was probably the best gig I saw at the Porterhouse. Films by TG and Dave Tibet on live mix and trumpet.
By the time I start side two I was going to gigs with Tim Bayes, he had a lovely green Ford Capri. "Thirst" on the car stereo cruising shotgun down the A57, Sean and Bernie in the back seat with the pennies ready for Dunham Bridge toll...ahh the memories. One thing that is noticeable (on side two) is my voice. At the end of most tracks it has me (as I was usually stood next to Tim) clapping and shouting out my fathers name. My father is called Rae.
The tape ends with "Where Were You" by The Mekons. The 7" version (not live)...I never saw The Mekons live - saw The Three Johns loads of bloody times though! This could be the greatest single ever put to vinyl and played loud reduces me to tears (even when sober).

"Porterhouse Blues" as I amusingly christened the tape (amusing to me anyway) is a treasured tape.
Tim also compiled a cassette of live recordings from Nottingham Rock City, I'll have to dig that out now...I think Matt Fretton is on there.