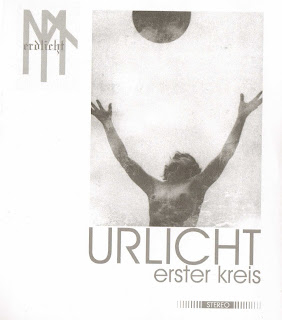 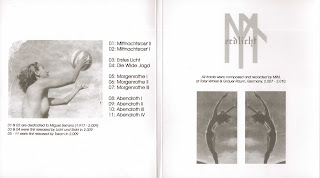 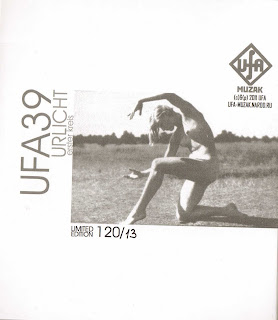 Just spent a pleasant while listening to the latest release by German project Erdlicht (Earthshine in English). "Urlicht~Erster Kreis" ("Primordial~First Circle"), a limited to 120 copies CDr on Russian based label UFA Muzak.
Erdlicht is one of a number of projects from German artist Mario Lohr. Mario also operates the label Licht Und Stahl and records as N.Strahl.N and Strahlenzentrum. "Urlicht" is a sort of story so far release as it comprises the 2009 album "Morgenrothe/Abendroth" and the 2009 mini-album "Erstes Licht" (which I have and love).
The album kicks off with two unreleased tracks recorded in 2009 and dedicated to Miguel Serrano. I am afraid I had to "google" Miguel to find out he was a Chilean philosopher and author and founder of "Esoteric Hitlerism". Interesting. "Mittnachtsrosr 1" is a heavily synthesized anthemic / nationalistic / militaristic piece. Think (early) Laibach. "Mittnachtsrosr 2" is more minimalistic with a random sequenced frequency creating a rhythm with a harmonious drone. This track builds and drifts and had me thinking (to myself) "This is bloody good music"! "Ertstes Licht" is organ drone is soundtrack music. Points of reference: Philip Glass, Tangerine Dream, John Carpenter..they are all in there. "Die Wilde Jagd" carries on in the same vein, with some excellent looped acoustic guitar coming in the mix...reminded me of Nocturnal Emissions "Stoneface" recordings.
The "Morgenrothe/Abendrothe" tracks could be classified as "Dark Ambient". A journey into subterranean "other" worlds. (A)tonal frequencies meet with bowed and bashed cymbals, small irritable noises creek in stereo, it has the same approach / feel as Lustmord's 1992 album "The Monstrous Soul", it is all very slow, heavy and sonambulistic but then by track 9 and 10 it all gets a bit lost, directionless and kinds of fizzles out into a nothing which is a great shame for an album with such a promising start.

The CDr is luxurious packaged with gatefold sleeve and postcards with pictures of naked ladies taken from a 1950's German edition of "H+E" or stills from a Harrison Marks film. The artwork / packaging bears no resemblance to the sound contained (apart from track 1...maybe), that and the dedication might deter some and disappoint others. A worthy listen though and ideal soundtrack for reading.