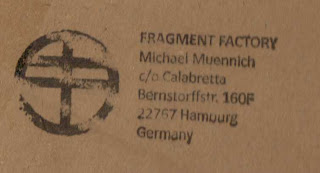 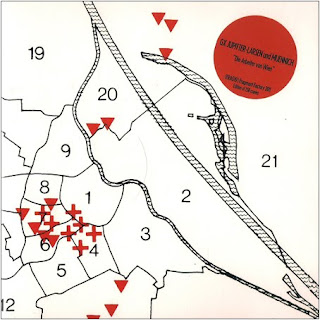 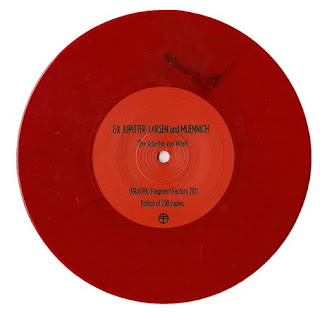 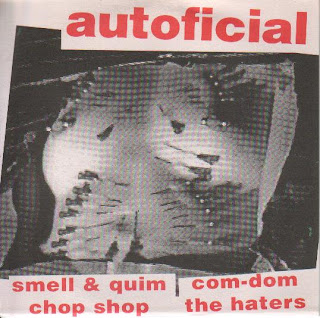 Last month saw the debut release from Muennich, a beautifully crafted cassette called "Rugged" on the Hamburg based Fragment Factory label. Muennich being the solo sound project of label MD Michael Muennich. This month sees the second release from Muennich, the 7" "Der Arbeiter Von Wein" a stark contrast in sound and approach from the cassette, but still as beautiful.
"Der Abeiter Von Wein" is a collaboration with GX Jupitter-Larsen, a US noisician / artist who needs no introduction here. The sound is pure "Power Electronics". Old analog synthesizer sounds rumble and tweet through a variety of sonic distorto effects whilst an angry voice venomously spits out the lyrics to an old socialist battle poem from 1920 calling for the workers of Vienna to unite against their oppressors. It is stirring stuff, very "old school" and very European. Straight away I was put in mind the works of Con-Dom, Consumer Electronics and Genocide Organ. I even dug out an old 7" I hadn't played in years; "Autoficial" on Noisopoly (GX Jupitter-Larsen's own label) to hear the sound of The Haters and Con-Dom of old. The single is from 1996 and for the first time I noticed that Con-Dom were miss-spelt on the sleeve!
If (like me) you love the sound of harsh electronics or power electronics (of old) then this slice of vinyl is a must have. Limited to 250 copies (125 on Red / 125 on Black Vinyl) and available from:
Michael at www.fragmentfactory.com- there y'go...no excuses.
I am now interested to hear what sound Muennich will create next after two really strong releases as an opening salvo.