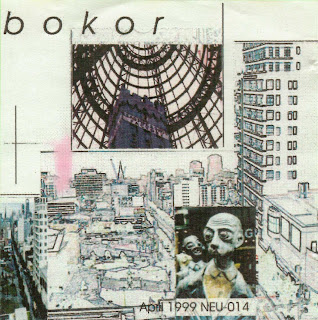 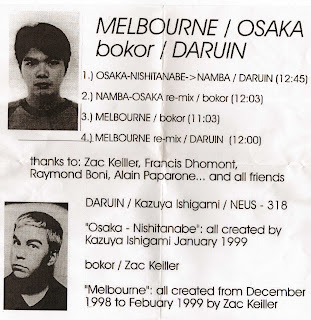 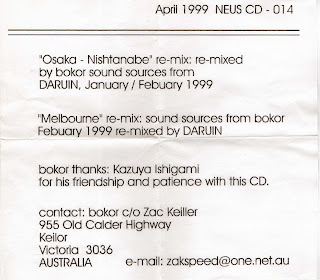 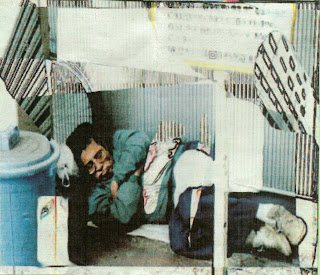 Have just spent a pleasant while listening to the album "Melbourne / Osaka" by bokor / Daruin released on the Japanese label Neus-318 in 1999. I got hold of the album (CDr) in a "Bjorn Tapes" trade-off back in 1999, I also got some Neus-318 compilation CDr's but they have been passed on over the years. I like this album.
It is a basic track and remix track affair with Daruin providing a track which bokor remixes and vice versa. It works because both artists are quite dis-similar in approach and makes for interesting listening. Track 1 is the opener from Daruin (AKA Kazuya Ishigami), it begins very "industrial" to me reminding me of the sound of Smith-Clayton Forge. For the first 7 years of my life (mid 1960's) I lived in streets off Monks Road in Lincoln (UK). Horton Street & Hillside Avenue for those with some geographical knowledge of the area and the sound I could hear for 24 hours a day was that of Smith-Clayton Forge and its' repetitive hammering as metal met metal to do whatever is done when metal meets metal. We then moved to a small town outside of Lincoln where all I could hear was the roar of Vulcan Bombers at RAF Waddington warm up their engines throughout the night readying for war. Is it any wonder I am partial to "industrial" music? Anyway, track one begins with the industrial foundry sound before samples of conversations in Japanese Shopping Malls and telephone ansaphone messages come in to the scenery creating "Eraserhead" imagery. A melodic cheap Casio sound then floats over the collage of found and field sounds. Track two is the bokor interpretation. boker is Australian musician Zac Keiller. Zac forgets the field recordings and takes the industrial sounds to build a rhythmic hypnotic track of clicks and crashes.
Track 3 is the bokor solo piece "Melbourne". The sound is of European Harsh Electronics. (EHE). Think Art Konkret, Soldnergeist, Netzach...not beefy enough for Cold Meat Industry..but certainly powerful enough for Art Konkret or Tesco Org. Then for the final track Daruin reduces the sound and adds the sound of the Osaka subway. Trains and station announcements.
The album slowly burns, peaks then dies to embers then dust.

It is a good listen. I am uncertain to whether or not Zac and Kazuya are still producing sound. A shame if not, but if I see any more releases by them I'll investigate.