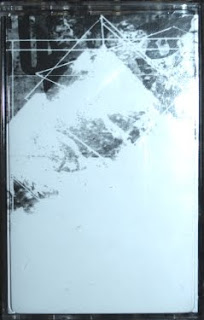 Excellent, a new cassette from Re-Clip. An eponymous titled C40 on the excellent Ikuisuus label. They released the Magnet North Duo/Grey Park live cassette last year.
Rather like the cassette "Notes" (released in 2009 by Hyster Tapes) Re-Clip presents sketches and work in progress rather than full bloodied tracks (For that I recommend the split 7" release with Kanttoripoika). Recorded on 2 and sometimes 4 track devices there are 5 pieces a side. Track #1 sounds very similar to #10 - an intro and an outro-duction. These pieces are heavy on the synthesized electronics and carry a "prog" feel, whereas tracks #3 - #9 are more experiments in rhythm. #3 has that slapping the cheeks and making shapes with the mouth type of sound (if that makes sense)? Very good. A few pieces are of broken or collapsing rhythms - broken disco is a phrase that came to mind....and it is not entirely successful. Side two has a couple of great grooves wrapped up in there. #9 has a "lost In space" vibe and reminded me of the first time I saw 808 State live at The Boardwalk in Manchester, 1988 I think ...
The last cassette I heard from Re-Clip was the split cassette release with Kanttoripoika and it had that "glitch" electronic sound, the sound Pan Sonic and Mego release, this release a bit more "lo-fi" and abstract (if that is possible).

Re-Clip used to be a part of Grey Park (Finland's finest) but has left this year to concentrate on his solo work. I bought this tape from Hyster Tapes distribution, contact them at www.pcuf.fi/~plaa/hyster.html. It costs about 3 euros. I imagine it is also available from Ikuisuus direct. www.ikuisuus.net.