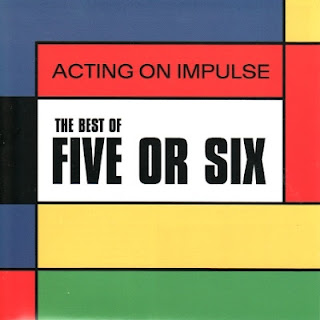 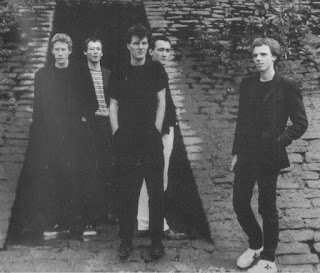 I am not a big fan of the "greatest hits" / "anthology" CD releases as a rule, I would rather get the original (vinyl) release. In this place it is vinyl first, cassette second and CD's only when necessary. I have a few "double-ups" where I bought the CD re-issue of a vinyl LP I already have, but that's so I can play it at work or in the car. "Strange Kicks" by ATV and "Ha! Ha! Ha!" by Ultravox! spring to mind. But "Acting On Impulse:The Best Of Five Or Six" CD by Five Or Six on Cherry Red Records is a must have, especially as it is being sold for around a fiver on various Internet shops.
Back in the day (1981) Five Or Six released one of the best post-punk singles, ever. "Another Reason" on Cherry Red Records. It is a single that has never been out of my collection. Recently the song has been covered by a band called Death In Vegas and used on a Levi's Jeans advert, and they claimed copyright - so law suits were filed and now Five Or Six have their song back. The B-Side is an avant-garde piece constructed out of amp noise and drumbeat with a voice over. Very Dome / Gilbert & Lewis, the single was produced by Kevin Coyne...who I learnt the other day auditioned for vocalist in the Doors after the death of Jim Morrison. There are tapes apparently!
Back in the day (1981) Five Or Six carried on releasing stuff, but being in Lincoln their stuff was very hard to get hold of, despite being "signed" to Cherry Red Records. In 1981 Lincoln had lost its' two decent record shops; Sanctuary Records and Rods and we had to make do with Prides ( a proto HMV) and Tracks (not as good as Sanctuary, but they did try), I'm not going to mention the short lived Express Records shop...I'm not!
Five Or Six were an experimental pop band. I put them in the same category as The Lines, A Tent and Plain Characters. They never had great media coverage, sort of ignored by the like of NME, Sounds and ZigZag so it was very hard to keep up with releases. In 1981 they released the 12"EP "Polar Exposure", not as immediate as "Another Reson" but still harbouring some great songs. This was the last Five Or Six release I bought, apart from a split 7" Flexi-Disc with Gang Of Four on the Dutch Vinyl label. I never knew they put out two albums and another 12" in 1982. Despite being signed to Cherry Red Records there stuff was given to European labels to release, then had to be found on import in the UK. The Belgian label Frizz Bee put out the album "A Thriving And Happy Land" and that was followed by the Spanish release of "Cantame Esa Cancion Que Dice, Yeah Yeah Yeah" on the Edigsa label. No wonder I couldn't find them in Lincoln!
So now Cherry Red Records have put out ten of the best Five Or Six songs from 1980-1982 on CD. Well worth the hunt because now the old vinyl releases are going for "big money" as Max Bygraves would have said. (topical). I saw "Another Reason" going for £25 on Discogs! I shall (one day) have a full Five Or Six vinyl collection but in the meantime this CD is indispensable and totally necessary. It is a great example of UK post-punk...the DIY experimental ethic when indie meant indie, not corporate trying to sell indie as a pre-packed style. I cannot describe the sound but if you like Felt, The Lines, Robert Rental, Wire, Eyeless In Gaza, Dangerous Girls etc this CD is worth getting.
One of the great things about the re-issue CD's is that most of them carry a great back story / history with pictures in the accompanying booklet. They have the "I didn't know that" and "Oh yeah, I'd forgotten all about that" factor. The booklets that come with the This Heat collection "Out Of Cold Storage" and The Homosexual's "Astral Glamour" are fantastic reads ... but they are sort of box sets I know, but the same can be said sometimes with the single CD. Think "Stamp Out Normality" by Pseudo Existors on Overground or "Floodbank" by The Lines or "Storm The Reality Studio" by Dead Fingers Talk. "Acting On Impulse" has one of those fold out to A4 size sleeves but is full of relevant information about formation and band members etc. Perhaps the biggest surprise to me (apart from the releases I knew nowt about) was that for a while Dave Knight was the guitarist in Five Or Six. I never knew that. Dave Knight was a founder member (with Five Or Six member Ashley Wales and Karl Blake) of Shockheaded Peters ... this much I knew, but I never knew he was in Five Or Six. I have shared the bill with Dave on a few occasions, got to know him (a little) and always enjoyed his company .. but I never knew he was the guitarist in one of my all time favourites! We sat together for ages waiting to soundcheck when he was with Amal Gamal Ensemble at the second Salon Event in London 2003 and we even shared flight and "taxi/lift" from Leipzig airport to the WGT Festival hotel in 2006 when he was part of Lydia Lunch's backing band - he never said a word! Dave know records and releases as Arkkon and is well worth searching out and discovering. The Five Or Six story is a fascinating one, well worth the read - so I won't ruin the ending (the butler did it) and it does catch up with all band members and there 21st Century activities.