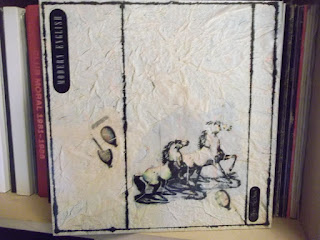 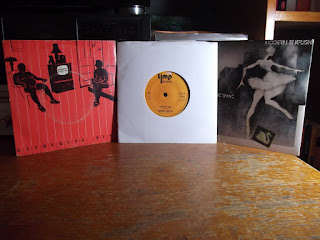 Whatever Happened To ... Modern English.....

In Totnes the other day and managed to get a copy of Modern English's second album "After The Snow" on vinyl. Import copy on Sire Records (not 4AD Records) and still got change from a two pound coin. I left the charity shop a very happy man.
Whatever Happened To ... Modern English ...
They were a great band back at the start of the 1980's. A great band with a great sound. A touch Joy Division, a bit Gang Of Four guitar but the synth/keyboards and bass line lead songs with hook, line and sinker lyrics made them stand out. They released anthemic singles. They were essentially a singles band, beginning in 1979 with "Drowning Man", put out on Limp Records and following up the following year with a debut release for 4AD Records and the superb "Swans On Glass". "Gathering Dust" soon followed, another great song with a powerful intro and sing-a-long chorus. "The pressure's on, no time to lose".
I (somehow) didn't like their first LP "Mesh & Lace", strangely enough there were no singles on the album, a big mistake for a singles band. The opening track "16 days" should have been a single, the song has all the qualities...but perhaps Modern English or 4AD Records weren't pushing for an indie hit at the time(?).
By the time Modern English came round to producing a second album a few "indie / alternative" bands had made roads into hitting the big time. Psychedelic Furs, Simple Minds, Bauhaus, Echo & The Bunnymen, Thompson Twins all spring to mind. They went to record in Rockfield Studios and produced the album to project them into the big time with rock producer Hugh Jones. Strangely enough Clock DVA did the same a year later and although releasing what has become my favourite DVA LP with "Advantage", they kind of plummeted into obscurity for a few years afterwards .. anyway, I digress. "After The Snow" was released in 1982 and was the last half decent record Modern English made. There are three singles on the album, the rest is bland 1970's rock...watery pseudo-folk Cat Stevens out-take type tracks...sad but true, but being a singles band - the three tracks that were 45's shine like diamonds in a (....well you know the rest).
There is "Someone's Calling" with its' jagged guitar and dance-tastic beat and poppy keyboards, followed by "Life In The Gladhouse", one of my all time favourite Modern English tracks. The production is superb and the editing (dropping the instruments in and out) is a little of its' time, kind of "we have the technology and we are going to use it" approach but it has not dated the power of the track. Heavy drums and bass, tweaking and screeching guitar with the hook line "Life In The Gladhouse Is Never Dull". I am sold. The final single off the album opens side two. "I Melt With You" is perhaps their most famous song, being used on adverts - and getting them an appearance on "Sabrina, The Teenage Witch". (Honest)! Eight tracks on the album, five bilge three classics. The Peel Session that was recorded to promote the LP included a track called "Being Peeled" - I have mentioned this track elsewhere, but it is a fine example of DaDaist composition and tape machine foolery...that was one thing Modern English stopped releasing early on - their "experimental moments"..perhaps the B Side to "Gathering Dust", the superbly titled "Tranquility Of A Summer Moment (Vice Versa)" was their final foray.

Whatever Happened To ... Modern English ..
And then they were gone...resettled in USA and signed to TVT Records, and became (to me) equated with the likes of A Flock Of Seagulls and ... well, just A Flock Of Seagulls actually. I never got to see them live at their "indie" height. They played locally supporting Japan, but I just didn't fancy going to see Japan. Wish I had now - but that was thirty years ago.
There is a singles compilation CD album, put out by 4AD Records in 2001 called "Life In The Gladhouse", if you see a copy and like the sound of "post-punk-pre-goth-posi-pop" then I suggest you grab it. I'm happy to have the single tracks on the LP.