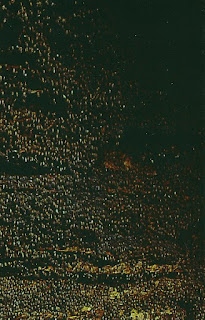 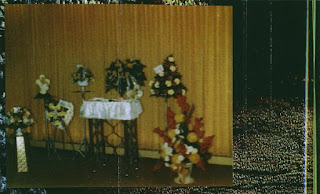 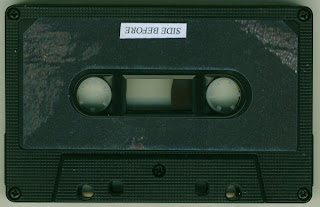 I have just spent a pleasant while listening to the latest release by Burial Hex. "For Granted Is His Will" is a C35 released by Polish label Sangoplasmo Records and limited to 100 copies.
Side One plays like a rollercoaster, a three-dimensional soundscape. It is a meditation built on synthesizer drone and amplified metal. The sounds are similar to those that L.A.Y.L.A.H. were putting out on their compilation LP "The Fight Is On". Very Organum, a touch Hafler Trio and extremely Lustmord. There are moments of melancholy calm, moments where the sound goes to the edges of destruction. Vibrations and sonics almost tipping over into an abyss. It is very difficult to differentiate synthesizer and amplified metal - bowed and scraped, never hit ... no rhythms here. The piece is called "A Saintly Death" and (the cassette is) dedicated to Clay Ruby's brother Grant who died inside 12 months of being on this earth...I was reading this information whilst listening for the first time and the piece took on a deeper/personal life.
Side two is entitled "Our Rainbow". A slow meditative piece with tanpura and melodica. It is an Eastern Mantra. Dirge music. Esoteric and quite beautiful - the tanpura has a lovely sound .. this track will get played, played and played again over the coming months.

Quite a Burial Hex week happening here with this (excellent) cassette arriving the same day as the Burial Hex LP "Six Wings" (the edition with 2 cassette tapes).
As mentioned "For Granted Is His Will" is limited to 100 copies, and I bought direct from the label and got copy #99..but who knows...try www.sangoplasmo.tumblr.com or Discogs. Well worth the chase.