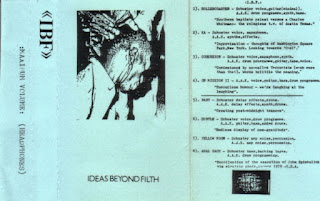 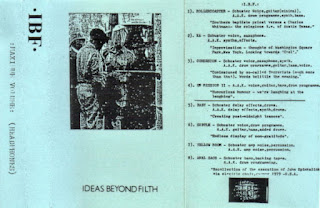 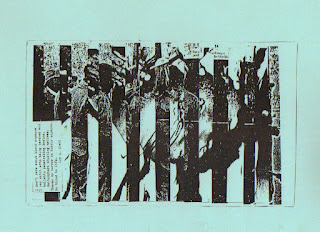 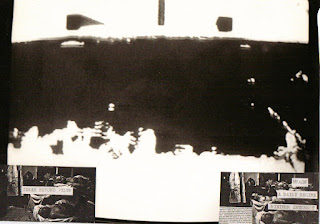 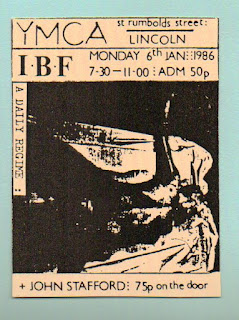 The other day I received an e -mither from my good friend Tommy in Sweden. He had been out buying stuff and found a secondhand copy of the old IBF cassette "HuAsh". He snapped it up for 50 SEK - about a fiver in English money. A couple of things surprised me here - I am pleasantly surprised that the old IBF releases are still out there, slightly surprised that there are still copies around...after 27 years and a big surprise that the cassette was so bloody cheap! Bargainus.
The cassette was released in autumn of 1985 originally on the Manchester based Carnifex Recordings label but copies were shipped to various other distribution labels and it is my guess that this copy came from Peter Zinken/Bloedvlag Produkt. Unlike today it was general practice to mail a "master" copy to an overseas distro outfit and it was for them to copy the tapes, photo-copy sleeves etc. Supply and demand, so it is hard to say just how many copies are floating about. Today cassette releases are limited to 10, 20, 50 or whatever then withdrawn from circulation. Also back then a tape used to come without labels, just an ordinary TDK, Sony, BASF or whatever - never Memorex! All IBF cassettes through Carnifex Recordings were on TDK AD's. (A by word for quality back in them days). I remember Peter spray painting a lot of IBF tapes.
Anyway, the e-mither made me dig out my copy of "HuAsh" just to hear what Tommy was hearing, 27 years after the release! I remember five or six (great band) years ago ploughing through old IBF tracks to see what could go on the Harbinger Sound 12"EP, but I haven't sat down and listened to much since then. "HuAsh", or "Hammers Used As Hearts" to give the release its' full title was recorded and released in autumn 1985 - where Tim and I were on phase 2 of Ideas Beyond Filth. We had set up a studio in Monks Road, Lincoln using borrowed equipment from John Stafford (TEAC 244), ex-Diet Of Worms member Crabby (Synths & Sequencers) and local band DOD (Effect Pedals and Roland Drumatix). Tim and I had our own guitars, saxophone and shortwave radio. We began what Tim called "A Daily Regime" where we would build tracks in the studio five days a week...nine in the morning until four in the afternoon. Some days were creative - and on others mass ennui was evident. Sometimes Crabby and sometimes DOD member Simon Kane would join in .. but mainly it was just me and Tim. "HuAsh" took about five weeks to create.
Two tracks from the cassette; "Anal Sacs" and "Ka" made it to the Harbinger Sound 12"EP and it is obvious that these tracks are a cut above the rest, mainly due to their improvisatory creation and lack of the Roland Drumatix, the drum machine dates the sound. "Anal Sacs" uses an old "Dr Rhythm" drum machine and is a far superior sound, giving the piece a more "industrial / Cabaret Voltaire" feel. There are three tracks on the cassette - "Rollercoaster", "On:Mission 2" and "Subtle" where the lead sound is the Roland Drumatix and each track falls because of this. Very 1980's! But, we were experimenting, trying to discover a sound and we learnt that drum machine rhythms were out and looping sounds to provide rhythm and/or pulse was the way we wanted to go. The studio had a digital delay ~ joy! There is a great track on there called "Yellow Room" which is all amp noise and percussive chaos - I think it was called "Yellow Room" because we recorded it in the kitchen and the walls were yellow. The track "Coercion" is miss-spelt and became "Cohersion" due to my comprehensive school education, but the biggest embarrassment to me is the track "On:Mission 2". A solo attempt at disco, of funky guitar and slap bass with a lyric paying homage to the antics of Peter Sutcliffe. (Talk about getting it out of your system)!

The cassette has two sleeves, both Tim and I had a go at designing the cover and we couldn't decide on whose fitted the tape more, so we plumped on two covers. Tim wrote the sleeve credits and notes.

As mentioned, the prime tracks appear on the eponymous Harbinger Sound 12"EP that was released in 2009, but if you do see a copy of "HuAsh" about please snap it up and if you don't like it, I'll buy it off you ... it's worth about a fiver.