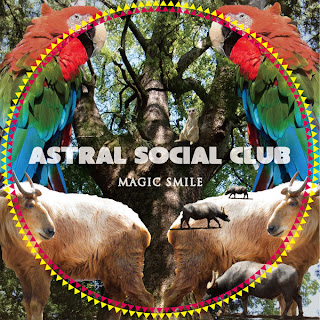 I have just spent a pleasant while listening to the latest release from Astral Social Club. The CD "Magic Smile" on Japanese label WonderYou. The album is compiled from old material remixed and new recordings. "Rubber Logg" kicks off the album, beginning all Japanese like with the sound of a Koto or Kugo being played by a waterfall (serenity) and finding its way to a North Yorkshire disco dancefloor. Astral Social Clubbing Music. Nearing the end of this 13 minute or so masterpiece celestial wailing takes it all a level higher before dropping straight into track two and "Mach". Let it be known that there are no gaps in this album, it plays like one long piece. "Mach" is a rework of the cassette single track "Ach" that came out last year, limited to 37 copies. It is all random sequencer patterns and "highland" sounding guitar ... but don't think Stuart Adamson. The titular track "Magic Smile" is a lament with phased drone and strumming guitar, it even has lyrics. "Multiple World Speed" is a track that does what the title suggests. It is a high speed guitar noodle piece (GNP) with space synths and a throbbing bass. Does anyone remember Bleep & Booster? "Och" plays like a soundtrack to one of their stories. Alien communication, tapes stolen from the Arecibo Observatory perhaps? "Och" was originally released as the B-Side to "Ach".
It is back on to the dancefloor everybody with "FRWRKX RWRK". The industrial dancefloor that is, with a motorik beat and freestyle guitar noodling (GNP). This is another 13 minute piece that two thirds in breaks down..the beat disappears. Police sirens wail, glasses are smashed, a helicopter circles overhead ... we are left in a void of reverse pulsations and electric panic. Bloody clever stuff. "Tempo Rubber" closes the album. Loops of Tubular Bells chime and fade into a melancholic organ affair bringing it all to silence.
There is a bonus track on the album. "Rubber Logg (Kufuki Remix)". Earlier this year Kufuki released a CD with an Astral Social Club remix and here the experiment is reversed. "Rubber Logg" still has the Koto sound before moving into high octane synth noodling (HOSN) and Japanese Temple music on half a gram bag of speed......we are back in the Astral Social Nightclub where Sticky Foster's wailing is replaced by a beautiful Japanese voice. An excellent end to an excellent and worthy release.
Packaged in full colour digipack style and a must for all. Check Norman Records + Volcanic Tongue for UK distribution, or contact Neil Campbell himself to bag a copy. www.astralsocialclub.wordpress.com
Posted by Steve at 15:12