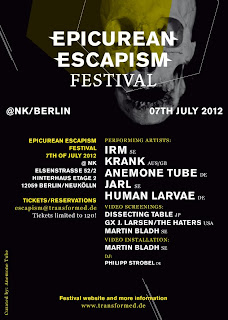 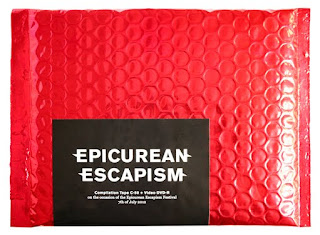 Have just spent a pleasant while listening to the latest release from the Belgian label Silken Tofu. The cassette / DVD package "Epicurean Escapism" released to commemorate the "Epicurean Escapism Festival" that took place in Berlin earlier this month.
The package comes housed in a deluxe blood red bubblewrap pouch with a flyer, C50 cassette and six and a half minute DVD-r and is limited to 100 copies.

On July 7th projects from Germany and Sweden performed at a venue called "The Feed", there was a video installation by Martin Bladh, films by Jupitter Castrol GTX and Dissecting Table and DJ's from Holland and Germany manning the decks. The whole event was organised by Stefan Hanser of Anemone Tube / Transfixional Entertainment and the NK Gallery. This release was available on the evening, an excellent "memento", package to take from the event. I (unfortunately) wasn't there but managed to grab a copy, there are still some floating about on the Internet...Discogs etc...
The cassette starts with Krank. Krank is the Berlin based project from John Murphy, here they provide "Drain Sounds In The Well", a fine slice of "gothik-Industrial" featuring light-metal percussion, springs, radio interference, occult wailing, speeded tape spools and various bleeps and boosters. Good stuff. The live set up featured Till from Gerechtigkeits Liga and Annie Stubbs (a name from the past....I have memories of her being a hair dresser in Hulme back in the early 1980's ... but then again, my memory is shite). Anemone Tube follow with a remix of "Dream Landscape" from the "Dream Landscape" album. Harsh ambient a la Troum and/or Maeror Tri. Good stuff. IRM follow, a live track and one of those "had to be there" pieces, coming across like a poor Swedish Con-Dom. Fellow Swede Jarl closes side one with a great hypnotic rhythmic piece called "Succubus". A great construction of bells, alarms, strings, electronica ... a great ending. I like Jarl, I have the CD "Parallel/Collapsing" that Segerhuva released in 2003 and find it a pleasant surprise every time I dig it out.
Side two opens with Human Larvae from Germany. Two tracks of PE. Nothing outstanding, listenable, but nothing special. Last year Idwal Fisher mailed me the Human Larvae CD "Home Is Where The Hurt Is" with a you may like this note attached. I did. I do - but not these two pieces. Dissecting Table follow with the eleven minute live track "Human Sacrifice". Live improvised electronics that doesn't really know where it is going, fortunately the tape ends on a classic slice from Anemone Tube. "In A New Light", electricity sparking in an empty room - the aftermath of chaos, desolation, desperation, dutiful despair. Beautiful.
An interesting cassette - would love to sample more Krank, Anemone Tube and Jarl and experience IRM live.
The short film by Martin Bladh (one half of IRM) is a take it or leave it affair with a small child, a girl talking about how she abused by he father...show me on the dolly how he.... type of thing. "It's 2012" and "Oh dear" were my thoughts - it lasted a couple of minutes...still if it's in your system I suppose you have to get it out before moving on ...

A worthy release and great artefact. I would have loved to have been there..try and hunt a copy down before it starts fetching funny money.
Posted by Steve at 22:49