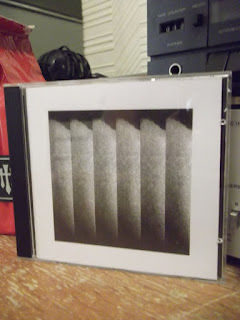 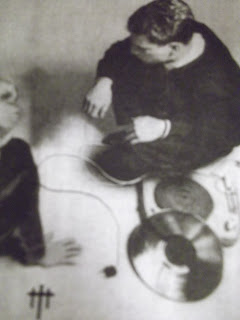 Last July (July 2011) I bought an album that I never thought I would own, such is its' rarity, scarcity and price beyond worth. That album was the compilation LP "East" on Dead Good Records. This July (July 2012) the same has happened again. I have bought two releases by Column One that I thought; 1: I would never see and 2: That if I did, I would never be able to afford. But I was wrong thanks to a generous chap that saw I had the two releases listed as "wants" on Discogs and offered them both to me at an incredibly reasonable price.
So this weekend is Column One weekend at Hartop Towers, a marathon Column One weekend of Olympic standard.
"Records" is a 40 minute CDr released to accompany a live performance at the 2002 "Argos Festival" in Brussels, Belgium. Column One were there to perform on the closing night. Here is an extract from the 2002 programme:

The audio-visual collective Column One, founded in 1991 in Berlin, is shored up by its ideological basis: their aesthetic approach critically enlightens on topics like (contemporary) Western icons, societal structures, political points of departure and the media. Earlier the core members René Lamp and Robert Schalinski had worked on film shorts; as Column One the two allow themselves to be accompanied – depending on the nature of the project – by Andrew Loadman, Jerôme Soudan (aka Mimetic), Wojcek Czern (aka Zia Siodma Gora), Jürgen Eckloff (Kein Zweiter, Kino) and Leo Solter (Kein Zweiter and Tornow). The film and video work of Column One devotes – not infrequently via cut-up techniques and synchronised montage – a lot of their attention to sound. In this way the group decodes the audio-visual ‘reality’ of for instance advertising, animated films or video clips in their work, and re-mounts them within a new context. As a result the original dialogues, phrases or treatments are mangled and recast as music. As founding influences the group points to the pop terrorism of Psychic TV, but then also combined with the radical constructivism of the author Paul Watzlawik and a string of film makers including Derek Jarman, Ingmar Bergmann and Alexandro Jodorowski. Next to videos Column One also produces music, a sonorous output where electro, noise and robot-pop interface. At the closing party of the argos festival 2002, the group (represented by René Lamp, Robert Schalinski and Jürgen Eckloff) will be presenting a new audio-visual work. Their performance gives both commentary and ironic critique on the theme of the concert series and exhibition ‘Pitch – Mutating Turntables’.

The CDr is released by 90% Wasser and limited to 20 copies, hence the reason why I never thought I would see or hear the album. The CDr is 40 minutes of turntablism. Creations built / constructed from lock grooves, run-out grooves, needle drops and jumps etc. Beautiful and textured dancefloor electronics, hypnotic and when listening to I get locked into a world of my own making - peaceful and very happy. The sound of Column One is multi-faceted, for 20 years or so they have never remained stagnant in sound and/or personnel. Not every release is immediate as this one, but every release is essential. My first hearing of them was the Tochnit Aleph double cassette "Live Im Hybridraum" released in 1998 and limited to just 25 copies, my old friend Mick McDaid had a copy - we both loved it so much we put out a bowdlerized version on CDr via our The Mouth Label label. This was the other release that came this weekend that I never thought I would see again.

Anyway, Column One = essential. If you do not know where to start please try there "No One" Box set. 3 CD's and 3 LP's with a booklet, all in one beautiful box.