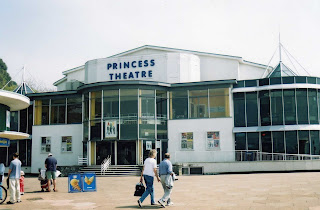 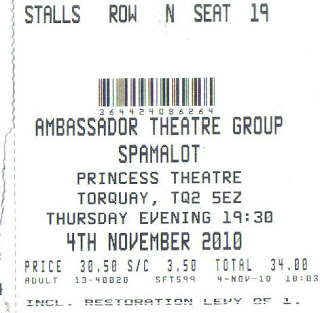 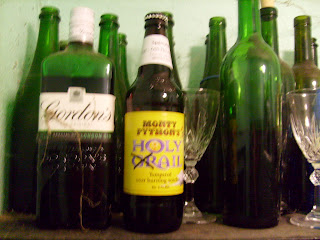 I have been living down here on The English Riviera now for a little over 8 years and I must admit I have only been to see staged plays at the local theatre three times. Well twice really because I went to see the same play twice! (The excellent "The Play What I Wrote").
Torquay doesn't really stage cutting edge theatre or get the stuff that I would pay money to go and see. "Spamalot" like "The Play What I Wrote" are rarities. Not surprising though as all the times I have been to see plays there the theatre has been only a third full whereas for the stand-up comedian Dara O'Brien ( whom I saw at the same theatre 4 nights earlier) was a sell-out. A shame, but what audience is there in an out of season decaying seaside town like Torquay? I would love to go the theatre more often but the Princess seems only to have stand-up comedians (Julian Clary, Mark Watson and the bloody awful Stephen K. Amos are all due over the next few weeks) and stuff like "Peppa Pig" or "Blood Brothers" or "Buddy" as stock and trade. I was quite tempted by last years pantomime as it starred Britt Ekland and to see an original cast member of "The Wicker Man" in the flesh would have amused me, but Tamsin took Oscar instead.
It may come as a surprise to some when I tell you that I am no stranger to treading the boards. Roar of the greasepaint, smell of the crowd and all that. I do have a B TEC ND in performing arts. My Erpingham in Joe Orton's "Erpingham Camp" had the audience in stitches I tell you, whilst my portrayal of Matthew Hopkins for a TIE production around the primary schools of North Yorkshire in "Vinegar Tom" had children crying! (I played him as an Irishman...I can't "do" Vincent Price).
So you see...I like the theatre.

Torquay Princess Theatre opened in 1961 with a gig by Tommy Cooper and Morecombe & Wise (oh to have been there that evening). It's a modern building with a policy that lets you take your pint in to the stalls to drink and watch...unlike Babbacombe Theatre (where I saw Tim Vine earlier in the year) which doesn't have a bar. (Visitors beware)! Sam Miguel on draft is £3.50 and a small bag o' nuts'll set you back a pound.
"Spamalot" appealed as I am an admirer of Monty Python, it is a programme I watched religiously in my youth along with the spin-offs "Fawlty Towers" (I know, set in Torquay) and "Rutland Weekend Television". "Spamalot" is basically the play of the film "Monty Python & The Holy Grail"..which is one of my favourite films. Not the funniest film yet made, I think that honour goes to "Blazing Saddles", but it is certainly up there. Top 10. For our tour we got James Gaddas as King Arthur (he was also the star of "The Play What I Wrote"...strange), a lass from "Emmerdale" as the lady in the lake and Todd Carty as Patsy...the Terry Gilliam role in the film.
Ever since I started "going to the theatre" back in the 1990's ( for my B TEC ND) it became an in-joke that at least one member of the cast would have appeared in "The Bill"...not really a competition with Todd Carty (former star of "The Bill").
The play is superb - funny...laugh out loud funny, the cast were very energetic in all song and dance routines, despite the very poor audience numbers, and if it comes to a theatre near you I recommend you go and see it, unless you don't like "Monty Python", then it is pretty pointless.

Afterwards (great song by Artery) at the bar I managed a quick chat and photo op. with the great & (must be said) humble Todd. Nice man.