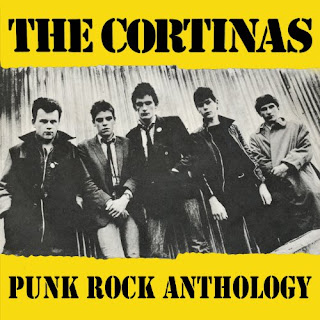 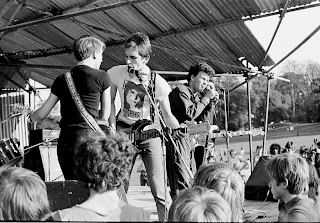 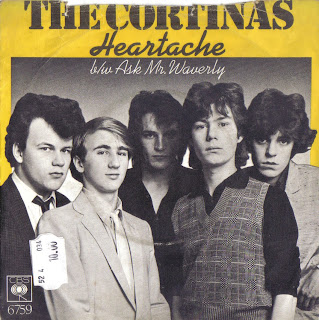 The word went out a couple of weeks ago. There was to be, for the first time ever, a compact disc of The Cortinas singles, album and Peel Session release. Hard to believe that no-one had thought to put all the recordings on to one CD before, but there y'go. Excitement reigned...well me and Steve Underwood were happy. And the 29th of November saw the official release. I found a copy on the internet for £4.50.
As a youth I loved The Cortinas. Never saw them live, never had the first LP but the first two singles are classics. They are here on the CD, tracks 1-4. Classics. My favourite being "Defiant Pose". Teenage anthem for 1978. I remember buying it on 12" format from a great record shop in St. Austell in 1978 whilst holidaying in Cornwall. I've always remembered where and when I bought the classics.
As a youth I "suppose" I liked "punk rock", although I was never a fan of the "biggies" like Sex Pistols or The Clash or Buzzcocks. I liked The Damned for a couple of LP's and The Jam had a few good hard chord songs, above all I liked The Stranglers up until and including their "Black And White" LP. I went more for the independent single, the stuff John Peel was playing the most and was 10p cheaper in the singles bin on Sanctuary Records (Lincoln) counter. Stuff like The Cortinas, Eater, Cyanide, The DP's, Menace, Outsiders etc along with steadfast labels like Rough Trade and Factory and Fast Product - that was my stuff.
After the single tracks comes the Peel Session. Quite weak apart from the two tracks that were the single "A" sides. The album follows. I hadn't heard the LP since 1980. I never owned a copy. A friend (Mark Collins) bought it and on first listen we declared it crap! Listening to it now 30 years later (and thirty years older) it still sounds pretty crap. Very weak and the songs have not stood the test of time. Unlike, say, The DP's "If You Know What I Mean" LP or Eater "The Album". I think the problem with The Cortinas is that they only had 5 and a half good songs and an album that only featured one and a half of them.
The booklet notes are a good read and really it is about time some person took it upon themsleves to write a book about the Bristol Music Scene in the late 1970's, early 1980's akin to the Sheffield tome "Beats Working For A Living", there were some great innovative groups / labels around then. (It has a "Where Are They Now" section (which I love) and Nick Sheppard is a DJ in Perth, Australia. Tim..hunt the man down)!! The booklet kind of alludes to the band running out of steam when they signed to CBS, but the songs on the LP are really bad. What it reminds me of is......there must have been an interim when The Leyton Buzzards became Modern Romance. They must have had some tracks/songs and thought...these don't really work as high energy punk tunes, why don't we try and add a salsa or rhumba beat and lighten the guitars, and then thought sod it - let's change our name and go all out pop. Well, The Cortinas LP is like The Leyton Buzzards in their interim period!

I was in Toulouse in 2006 where I found a lovely little second hand vinyl shop, and I found (for 10 Euro) a copy of the "Heartache" 7". I had to buy it. B Side is their classic "Ask Mr Waverly". And if you are wondering, the half decent track is "Radio Rape" (which could have been a DP's song if you ask me).
The CD is a good document of a band with five and half decent songs who after one LP had the decency to call it a day...how many albums did The "bloody" Clash make? (whatever the number it was, it was that number too many). If seen for a fiver and you know of The Cortinas I say "buy it".