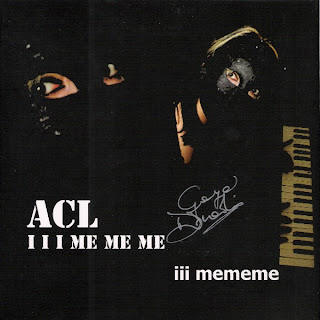 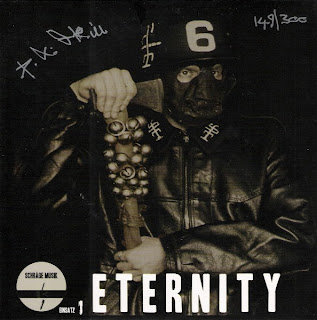 Just spent a pleasant while listening to the new 7" by Schrage Musik + AntiChildLeague, (ACL),
released on the Einsatz label earlier this month.
Schrage Musik (sorry, there should be an umlaut over the "a" in Schrage, but I don't know how to put it there on this computer) are a new one on me. It is the latest project from Patrick Leagas. I know Patrick was the original drummer for Death In June back in 1980, leaving in 1985...about the time DIJ went a little "pants", but I have never "followed" his output through 6th Comm and Mother Destruction. Probably because DIJ went off the boil a bit I thought Patrick's material would too....it's the way my mind works...add to that he was calling himself Patrick O'Kill (Or to give the full Irish name Patrick O'Killy Killy Killy Kill), made me give his work a miss. 2010 sees him finish with 6th Comm and start Schrage Musik (the sound of firing cannons or "obscure music" depending on which translation tool you use), and also teaming up with AntiChildLeague. "Eternity" is a good track. Very militaristic in rhythm with a vocal that is very similar to Adi Newton of Clock DVA. With a hook line of "I don't want to live for eternity" sang out over a steady beat it becaomes instantly likable + sing-a-long-able. Good stuff, I'd be tempted to hear a whole album.
Gaya Donadio and her AntiChildLeague can do no wrong. Like Nico, I just love her voice and vocal. The ACL track "III Me, Me, Me" is like a following on from last years "Big Fat Arse" 7". Self obsession is no bad thing especially when accompanied with a great synth keyboard "riff".
I saw AntiChildLeague live back in 1999 at The Red Rose in London and have followed the output of Gaya ever since, even asking her to contribute live vocals to a live performance of Dieter Muh "Stella Polaris" at the 291 Gallery in Hackney years back. I love her voice so much! (A shame that performance was never "properly" recorded..it would make a great release).
I saw AntiChildLeague live in 2008 at the Grovesnor in Stockwell, London..Excellent gig.