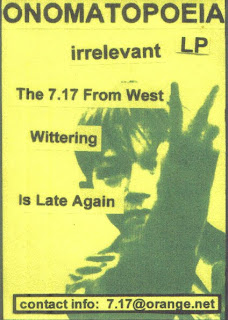 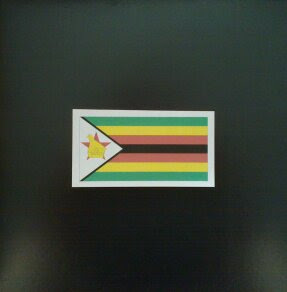 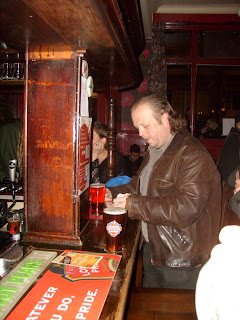 One of the highlights of the year has been the reimmersion (of sorts) of Onomatopoeia.
The UK label The 7.17 From West Wittering Is Late Again (perhaps the worst named label in operation at this moment in time) has re-released the 1997 cassette "Irrelevant" on vinyl format. I do not know if it is a straight cut from the tape release or a remix / remaster by Onomatopoeia but it is an excellent album, and if it is 13 years old...then it is a timeless classic.
5 Tracks that journey along a rumbling electronic drone track each one having a dominant instrument in the driving seat. Hunting Horn, Cymbal, Piccolo, Bass Guitar + Home-Made Zambomba. I don't know whether or not the release heralds a new phase of activity for Onomatopoeia or whether this is a one-off boot, like the recent factor X LP, or if the person or persons unknown behind the label is in fact Steve Fricker...my paypal monies went to a guy with a suspiciously Greek sounding name.
When in operation Cheeses International (home label for Onomatopoeia) was one of my favourite labels, with catalogues to rival any small noise fanzines review section. Journeys to London often meant a meeting up with Steve (and more often than not Mark Durgan + Steve Underwood as my visits to London would be for gig reasons only), finding a cheap pub and drinking ourselves in to oblivion...laughing all the way. I got drunk with Steve the first time I met him (at a Der Blutharsch gig at The Slimelight in 2001) and I was drunk the last time I met him (at a Con-Dom gig in Stockwell in 2008).
I only managed to see Onomatopoeia live on one occasion, the gig wasn't too clever either. On a cold winters night in Bristol Onomatopoeia played with Consumer Electronics, Grunt, Emil Beaulieau + Jessica Rylan. The evening was running hopelessly late and some folk had soundchecks and others didn't. I don't think Steve did and his box of noises and tricks seemed to betray him that night, resulting in Steve telling jokes and smashing glass on his fists. It was like when I saw Fad Gadget in 1984 at Manchester Hacienda in front of about 20 people..he smashed his guitar and ran in to a brick wall giving himself a nosebleed (+ perhaps a broken nose) all because his microphone and/or monitors weren't working. You had to feel sorry for the chap. Onomatopoeia in Bristol was like that + soon after Steve went completely off the radar. No response to E Mails and a cessation of Cheeses International.
Like I mentioned, I met Steve at a Con-Dom / Pain Nail gig in 2008 in The Grovesnor, Stockwell, and as I left, walking for the night bus to Tottenham Hale in the freezing winter fog so too did Steve disappear...no sightings since.

"Irrelevant" is limited to 300 copies. Each cover has a different sleeve - a small flag stuck to the cover, and in my mind is essential. BUY!