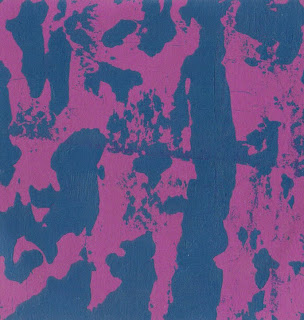 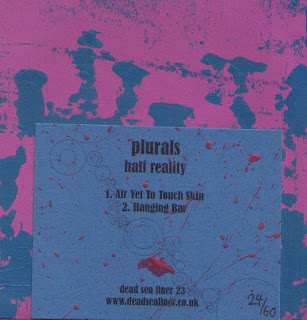 Was asked a few weeks ago to perform live in London. The venue is The Ivy House in Nunhead, or Peckham Rye depending on which search engine you use, this will be the first Dieter Muh live gig of 2010 - it will also be the first Dieter Muh live gig with just myself.
There are other live dates being planned for later in the year (and I thought these would be the first Dieter Muh gigs as solo performer), but being asked is always an honour and also on the bill are Plurals.
Last year I got in to the sound of Duncan Harrison and he kindly mailed me a jiffy of his wares as a solo artiste and as a member of Plurals. I played the Plurals stuff loud as I pottered around Hartop Towers...liked...and told him so. Now I am doing a gig with Plurals I thought I should reacquaint myself with their sound.
I played the CDr "Half Reality". Released by Dead Sea Liner label. When I first played this I was reminded of Popul Vuh + Moebius and the first track on this "EP" (it's 25 minutes long) still leaves me in this frame of mind. There's lots of chords played by keyboards and guitars being held by feedback on the brink of destruction creating a swirling swamp of psychedelia that lifts and switches from ear to ear. (phew)!! It's good stuff - very cinematic. Track 2 begins like the Spelt/Lynch soundtrack to "Eraserhead" with factory ambiance and the sounds of escaping gas ... very good .. but soon switches back in to heavy Yamaha keyboard chords and swirling guitar feedback and a depressive vocal drone. It kind of veers into Skullflower territory but doesn't quite reach that self-indulgent level. Think Astral Social Club, think Culver ... It's OK.
What I like is the sound is obviously produced by "musical" instruments (No laptops were harmed during the making of this release) - I could be wrong, it will be funny if I arrive at the gig and see Plurals set up with three laptops - and recorded live.
I am looking forward to The Ivy House gig. (March 19 by the way). I shall be doing an improvised piece lasting 23 minutes of all new Muh material + sound......
Posted by Steve at 12:59