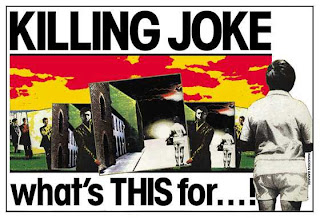 Just spent a pleasant while listening to Killing Joke's second and best LP "What's THIS for...". A classic LP and one I used to dance around and gesticulate to when it was released. I was never a big KJ fan though, never saw them live (although they were constantly playing nearby venues in Sheffield and Nottingham) and gave up with them after the "Chop Chop" 7" - after a poor showing with "Empire Song".
Back in the day (late seventies - maybe 1980) I was in Lincoln's premier indie record shop "Sanctuary Records" and the guy behind the counter (Nick Green - drummer with local heroes Sinking Ships) handed me a copy of the 1st Killing Joke LP with the words "'ere you'll like this". Nick Green gave me the 1st Killing Joke LP, and like I did. I whipped up the "Wardance" 7" and the not so good "Turn To Red" EP. Even bought Ski Patrol records because they were on the same label. The second LP was their climax though.
I found the LP for a pound not so long back + the "Tension" 10" for ten bob.
Now, nigh on 30 years later and Killing Joke still sound bloody fresh and exciting. I can hear the influence of The Glitter Band in their sound, and dub. There is also the sound of what was around in there too - Theatre of Hate, Public Image Limited springing immediately to mind. And now I can hear Ministry, Minister Of Noise and even Skullflower in Killing Joke. I'm going to have to buy the 1st LP now.

In the day Killing Joke were a very "secret" band. Not much known about the members and a manifesto wrapped in the occult/numerology/fascist politics etc - it went over my head at the time - I know they relocated to Iceland to await the end of the world and came out the other side with a bloody poor LP, but a lot was left in secrecy. Is there a book on/about Killing Joke? I'd buy it. I know they have reformed - was even tempted by a London show in 2008 but thought about a venue full of ex-Goths and Chicken Dancers put me off.
Posted by Steve at 21:05