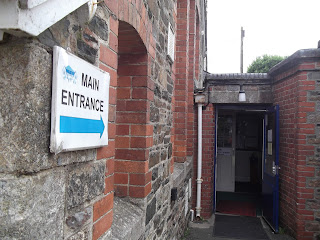 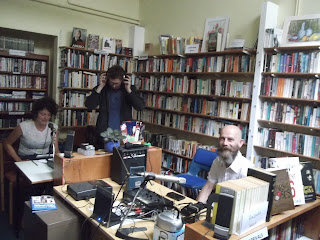 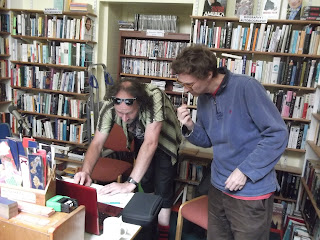 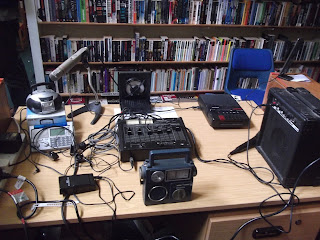 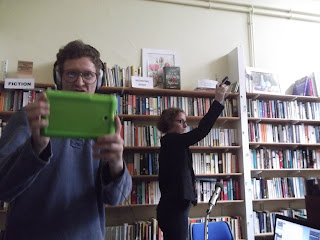 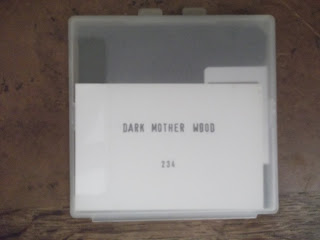 Back in 2001 I saw Treriksrøset at the Fylkingen in Stockholm. His performance was billed as "One Man Static Live No-Show". Dark Mother Wood's debut live performance at South Brent Old School Community Centre could be described as similar. One man sat in a chair, no visuals, no movement just pure noise. Of course back in those days, 14 years ago, harsh noise wall as a style, as a genre did not exist. Dark Mother Wood (on this occasion) were HNW.
Dark Mother Wood is Alasdair Robertson, sound artist, photographer, South Brent resident and presenter of the "Clicks & Hum" radio programme on SoundArt Radio (102.5 FM). Dark Mother Wood present some interesting, eye catching imagery on their Facebook page and describe their sound as electro-acoustic folk. I still think Harsh Noise Wall is nearer.
The fifteen minute performance took place in the library of the community centre. Acoustically brilliant and on the same surreal level as watching Nocturnal Emissions and Nick Bullen in a village hall in Polruan (try and find that place on a map)! This wasn't a gig in the traditional sense of the word, it was a live broadcast as part of an awareness raiser for the work of SoundArt Radio and South Brent Community Radio. Earlier in the day there were performances from Lucy Simister and Antony Jinman along with poetry, quizzes and local conversation. Dark Mother Wood closed the proceedings.
Alasdair provided fifteen minutes of free-form noise. Shortwave / Longwave radio conversations, tape machines, headphones as microphones, distortion machines, a box that clicked and hummed, wind-up machines, and a continual high pitched sine wave … and it was this that became obstructive to some of the sounds that were building. I have seen a performance (on the Internet) by French artist Vomir, this sounded very similar. Perhaps the performance needed visuals, but then (and at the same time) it was a performance for the radio, hopefully the next performance will feature imagery / visuals, theatre and the surround.
Alasdair handed me his debut release .. a Dark Mother Wood Floppy Disk. Excellent. I shall treasure.