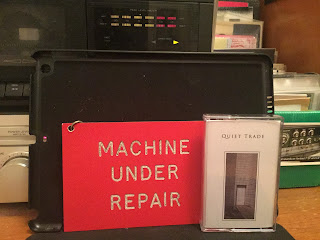 I have just spent a pleasant while listening to the latest release from Cheapmachines. "Quiet Trade" has been released by Brighton based label Strange Rules. Originally only available as a download (boo) on the Phil Julian / Cheapmachines web site, http://cmx.org.uk, those fine fellows at Strange Rules have decided to put it out as physical matter albeit in an edition of 84.
The four pieces were recorded throughout 2012 at various locations in London and Berlin and I think the recordings catch Phil Julian on the cusp of dropping the Cheapmachines moniker and becoming (simply) Phil Julian.
#1 is a great introduction, a journey down corridors and into rooms. Warm but with a sense of unease. I sense a nod towards the work of Nurse With Wound in this piece. Drone work with quiet murmurings and hums, static, empty spaces with shuffling beings. A moth caught in the lampshade, a gentleman in an iron lung … These are strange rooms. Half way through the piece and a door is opened into the room that reminds us that in 2012 Phil Julian was a member of The New Blockaders. #2 brings to mind David Jackman, but that is just scratching the surface…and cymbals. Abstract sounds creating a cacophonous symphony. Piano, drill, resonances & vibrations, Tibetan bells and bellowed organ sounds.
Flip the tape and there is a warm opening, a beautiful organ drone waving not drowning in a peaceful place. Nurse With Wound's classic "Soliloquy For Lilith" is evoked. #4 picks up the pace, a race through space with a pocketful of contact mic's. 2012 and Phil Julian was playing a few gigs with BBBlood … the influence is obvious here. And like Putrefier became Mark Durgan and BBBlood became Paul Watson, Cheapmachines became Phil Julian.
A brilliant release and despite being 3 years old - not dated at all. As mentioned it is an ultra limited release so go to : http://www.strangerules.bigcartel.com/product/cheapmachines-quiet-trade-cs-rule-092
£5.00 well spent.
Posted by Steve at 18:40