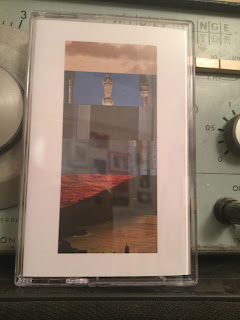 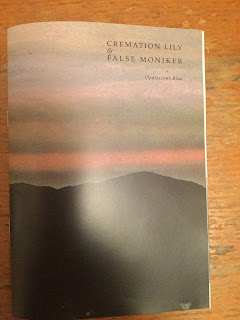 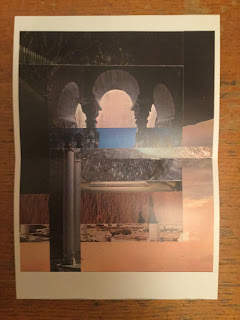 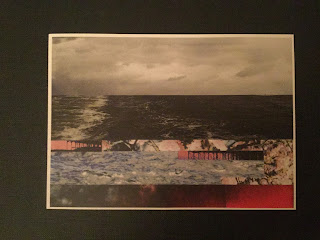 Staying with the Brighton based label Strange Rules (see previous post on Cheapmachines) and the C20 cassette release "Opalescent Blue" by Cremation Lily & False Moniker.
Since experiencing Cremation Lily live in Belgium last year it has been a great pleasure discovering his sound through various releases - mostly cassettes on his own Strange Rules label - but there are others .. vinyl on Harbinger Sound and Alter as well as tapes on Total Black and Fusty Cunt. (I know, some folk never learn).
"Opalescent Blue" has been released to coincide with an exhibition at the Collectiv National Gallery in Antwerp (Belgium) by Zen Zsigo (Cremation Lily) and Niels Geybels (False Moniker) called "The Storms Of Summer". The exhibition ran throughout July.

Five pieces covering twenty minutes, the pictures painted are incredibly peaceful, floating through time and space. Side one features an ethereal guitar á la Durutti Column set against such sounds as children playing, calls to prayer, engine running drones and a great heartbeat pulse. The sound is slightly lo-fi, the sounds are quite "murky" in places .. but that does not distract from the overall atmosphere. Side two has three opposing pieces - still the "floating in space and time" synthetic sounds - "Stars That Outline Your Body" has Zen screaming a poem accompanied by "biscuit tin" style percussion. Not the greatest but it does remind me that Cremation Lily are associated with Unrest Productions. A short interlude of lock groove and vinyl "run-off" manipulation leads us to the finale and the excellent "Paradise Capsules". The coupling of heavy keyboard against light floating polychord synth waves and a euro dark wave disco backbeat. Cue the dry ice. It is the kind of sound that Belaten have been releasing and distributing of late.

Great tape - a fantastic 20 minutes. I am awaiting the day Cremation Lily (and False Moniker) start releasing on CD or vinyl. "Opalescent Blue" comes with a small booklet of collages and photographs treated and constructed by the artists and is limited to 84 copies. Try http://www.strangerules.com but, like all Cremation Lily tapes at the moment, it won't be there for long.
Posted by Steve at 17:23