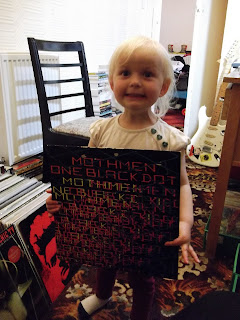 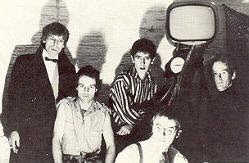 A couple of old vinyl releases have come through the door of Hartop Towers this week. Firstly I was given a copy of Stiff Little Fingers 7" "Alternative Ulster" by a friend. A classic slice o' vinyl that I probably wouldn't have bought "again", but gladly received as a gift. It has one of those intro's that used to get me onto the dancefloor of Lincioln AJ's or Retford Porterhouse after hearing the striking of the first three chords. Also include The Mekons "Where Were You?", Killing Joke "Wardance" and Punishment Of Luxury's "Brainbomb" onto this list. Songs where I would enter all flaying arms and legs and end up air guitar and mimed vocals after 90 seconds.
I also got an LP by Mothmen. Mothmen have been recommended to me by a couple of folk, Steve Underwood being one of them. I saw their LP "One Black Dot" from 1982 (and released by Do It Records - home of Adam & The Ants and Antony More) for sale cheaply on the internet, so I bought. (Cheaply being change from a fiver cheaply). This LP comes after their time on Absurd Records and On-U Sound.
The album is produced by Hugh Jones. I have another LP produced by Hugh; Clock DVA's "Advantage", my favourite DVA LP (honest!!), so I was quite intrigued to the Mothmen sound. Mmmmm, sounds like Howard Jones (perhaps a relation)? Sounds like smooth funky pop songs a la Medium Medium (when they put out stuff on obscure Dutch labels), or The Transmitters (when they released that fuck awful "24 Hours" LP). There are two tracks "Waddada" and "Weekend" that sound like Sting in the late 1980's. Yep! That bad. It sounds like 4,000,000 Telephones and that other awful Lincoln "White Funk" band from the 1980's Pulse8.
What happened? These are the musicians who delivered (as Durutti Column) "No Communication" on the Factory Sample EP. Needless to say the bass and drums went in to Simply Red shortly afterwards.

There is one pretty good track on the LP - "Temptation". Poptastic. The LP will be filed as an 80's curio, I think I'll try and hunt out the On-U release.