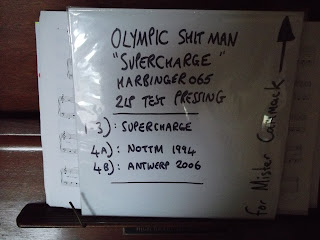 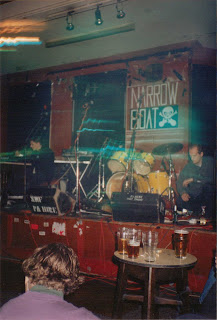 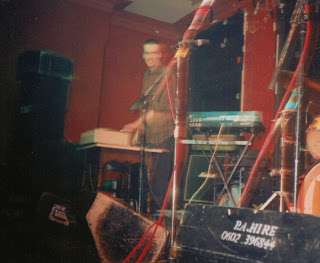 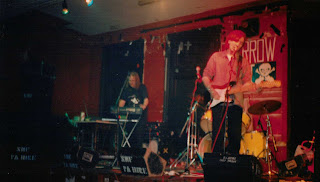 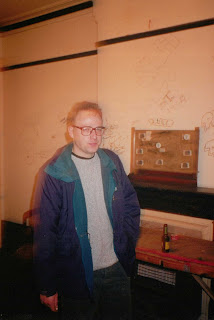 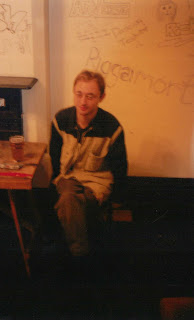 I was mailed a test pressing of the soon to be released Olympic Shitman double LP today. I noticed that Side 4 included a piece from the gig at the Narrowboat in Nottingham on the 17th December 1994. Dieter Muh were "bottom of the bill" that night, Ramleh were top and Olympic Shitman were squeezed in the middle.
In 1994 Dieter Muh formed for only one gig, we were supposed to support Suicidal Flowers at a venue in York but that fell through so we decided to book a venue and do a gig anyway with our friends from Sahko Records. I mailed a tape of the gig to Mark Durgan of Birthbiter/Putrefier fame and he put me in contact with Steve Underwood with the possibility of of a live gig supporting the upcoming Ramleh/Putrefier gig in Nottingham. I mailed a cassette to Steve, got the thumbs up and what should have been a "one-off" performance was turning into "And the name of the band is..." situation.
Like the York gig we decided not to rehearse, we were 100% improvised. One thing we did learn from the York gig was that 1 hour is too long, so we decided to cut the set to 40 minutes. (I now think that 40 minutes is too long - but these were early days). Dieter Muh played five gigs with the line-up of Bayes/Cammack/Uden and The Narrowboat is my personal favourite. #1 in York was far too long, #3 with Soviet France I have no recollection of and the two following gigs (in Bradford and York) we rehearsed and did "songs", and that was a big mistake.
For the gig Dave wandered around various effects on his Roland JD800 whilst Tim (well forward in the mix this time) mixed in tapes of his field recordings made whilst on his travels in India, Japan and America, I swapped between playing the guitar and bass guitar with a hand held fan through a variety of effects. Gary Mundy (reticently) let me use his VOX AC30 valve amp. Listening to a recording of the gig, the Muh set had its moments. A ten minute section called "Introjection" ended up on the cassette "Mutus Liber", a tape Dave compiled to advance the cause of Dieter Muh.
Naturally - travelling on the day by train from York to Nottingham and then sitting in the venue for roughly 3 hours before Steve Underwood or anyone showed - I was pretty half cut before the evening started. Mark Durgan and Andy Bolus showed up late due to a "smashed windscreen" accident on the A1(M), and Ramleh took an age to soundcheck. Memories are blurred. Olympic Shitman was fun, Ramleh were awful. John Everall walked out it was that bad. 17 years - a long time ago. Dave was angry with Tim. "He's wearing a fucking car coat"! Simon had drugs, and listening to the recording it was a great gig.

Looking forward to indulging myself in some Olympic Shitman.