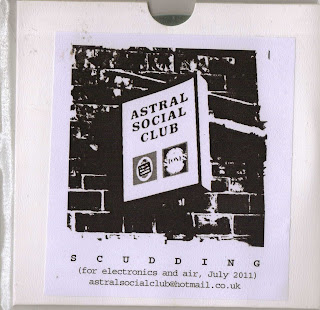 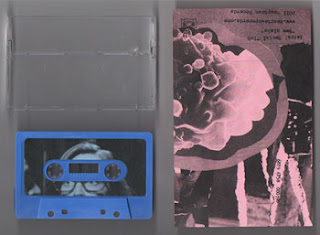 Have just spent a pleasant while listening to a couple of new releases by Astral Social Club.
Firstly comes the self released CDr album "Scudding". A title that intrigued and I had to look up:

Well there y'go.
It is an excellent album, and different from the last Astral Social Club release I got hold of....which is one of the reasons why I like this project alot. I never know what sounds are going to be coming out of my speakers, in that sense I align Astral Social Club to Column One. "Scudding" starts off quietly with feint knockings and pulses before developing in to a steady rhythm. For those who can think "Still Walking" by Throbbing Gristle and imagine an expansion on that theme....think on. A rapid chopping rhythm plays whilst sequencers, guitars, disembodied voices and magic intertwine throughout - even polyphonic keyboards at the end. It has taken a couple of listens to appreciate this release. It's 45 or so minutes long and a must. Running somewhat shorter is the Astral Social Club release on Beartown Records. A C30 cassette called "Two Slabs". (No searching the Internet to know what this title means). The inner sleeve holds two cryptic titles; "Rare Rare Congletincy" & "6879 6758 000390". The latter maybe a mobile phone number thus following the tradition of naming great songs after phone numbers - The B52's "6060842" and City Boy's "5705" spring to mind. Anyway, Slab #1 has a Seventies sequencer feel to it - again I was taken back to early TG and Cartertronics. Slab #2 has Neil in drone mode, heavy drone mode...both pieces are OK (highly listenable) but I do get the sense that they are taken from longer pieces and that is "something" that annoys me a tad. I also got a copy of Slump's "Malpas Way" the same time as the ASC cassette (another Beartown Records release) and although the cassette is very enjoyable / highly listenable both tracks end suddenly - a journey cut off before its' natural end...and I think that is wrong. it is something that annoyed me back in the 1990's where bands such as Lull were putting out 7" singles of tracks which were obviously longer than four and a half minutes.
Beartown Records get in touch. A fine and reputable cassette label. They say that they want to put out a cassette of two tracks - 15 mins a side, do you record two tracks that are 15 minutes long especuially for the release or just give them something that cuts off after fifteen minutes? I feel Slump go for the latter - a shame as side two builds beautifully...side one is a bit too Terry Riley!
Both releases are recommended and available from Astral Social Club (just google) and try Beartown Records for "Two Slabs". (www.beartownrecords.com). The tape is limited to 49 copies and is £4 postage paid in the UK - fucking bargain. I did notice that Second Layer Records in London were selling the excellent "Skelp" 7"/CDr by Astral Social Club for £4 on their mail order web-page. Another fucking bargain! BUY.