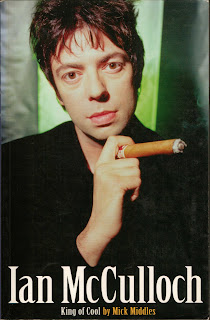 I read this book, all 201 pages of it in 4 days, for me (an agonisingly slow reader) that is record. At the moment I am reading the Austin Osman Spare biog. by Phil Baker, but I popped in to Oxfam (St. Marychurch division) last weekend and saw this book sitting on the shelf for a couple of quid - I couldn't resist, besides I wasn't too keen on taking the Spare book to read at work, grubby fingers etc....So, either it was a slow week at work last week, or the McCulloch biog. is gripping and unputdownable. I hate slow weeks at work - time drags....
I read this book in the manner it was written - or at least "put together" as Ian McCulloch isn't interviewed for the book, the author, Mick Middles, has put together a story from previous Echo & The Bunnymen interviews from Mojo Magazine, Sounds and a couple of books already written about Echo & The Bunnymen and the history of Liverpudlian music in the late 1970's - with haste. Information is given in a scant manner and not meant to be dwelled on here. The level of word ship is for a reader of (say) "Smash Hits" or "Loaded". The book was published in 1998, just in time for the Echo & The Bunnymen reformation, and Ian McCulloch's collaboration with The Spice Girls.

I will point out here that I am not a "fan" of Ian McCulloch or Echo & The Bunnymen. I do not now nor ever have owned a record / track by them. I don't hate them, just see them as a "take it or leave it" type of band and I'll rather "leave it". I saw them live back in 1981 at the "Days Of Futures Past" festival in Leeds. I was there for The Cramps and (don't laugh) Thompson Twins. Whilst Altered Images were on (I know you're laughing now) I managed to buy the LP "Talk Like A Whelk" by Shoes For Industry from a merch' stall at the back of the room, (regains "cool") so I spent the rest of the day with an LP under my arm trying not to be jostled or touched by a thousand or so "indie kids". Were they any good live? No. But I am interested in the history of punk / new wave (call it what thou wilt) music and knowing that the early days of Echo & The Bunnymen would be covered, I bought and read.

I finished the book ending up not liking Ian McCulloch at all - rather like the Nikki Sudden book, but then again the book is a compilation of press cuttings and press interviews so the "real" Ian McCulloch is not included here - just his press persona. Infact, the book should really have been called "The Echo & The Bunnymen" story, because Ian's personal life and life after leaving the band hardly ever touches the pages. The 8 pages of photographs included also have page size pictures of the rest of The Bunnymen and a picture of Echo & The Bunnymen when McCulloch wasn't their singer, no pictures of his childhood, wife, back stage moments etc.... A book very much for record company approval.
The interesting part (then) for me was the late 1970's and Eric's Records, Eric's Club, Probe Records etc, the story of which is told far more eruditely in Alex Ogg's "Independence Days". All too brief mentions of The Crucial Three here, but I did not know that Ian McCulloch & Julian Cope were both "roadies" for The Fall. Whilst reading the book I started to think about the "Liverpool" bands that surfaced in the late 1970's...and how I didn't like many of them. I had a soft spot for Deaf School (Liverpool's answer to Burlesque - The Band), Pink Military Stand Alone and Orchestral Manoeuvres In The Dark (the early years). I used to love the song "Mantovani's Hits" by The Yachts too but that is about all. I would lumpen Echo & The Bunnymen in with Teardrop Explodes, A Flock Of Seagulls and China Crisis. Scouse pop.

As mentioned before the book is written by Mick Middles. I remember him from when I used to read "Sounds" back in the day. He rather proudly mentions in this book that it was he who started "The movement with no name". A genre to parallel the other "movements" that were being pushed by the press at the time, like Oi, or mod or power-pop or N.W.O.B.H.M. or goth rock and such-like. I remembered this faux-phrase. It made me laugh then and it makes me laugh now.
I am glad I have the book, it fits in nicely with my collection of music biogs.


Just as an aside - Tamsin (the present Mrs. Cammack) subscribes to a magazine called "The Knitter", and every month that it comes through the letterbox we both sing "Spare us The Knitter" to the tune of "The Cutter". There y'go.
Posted by Steve at 21:28